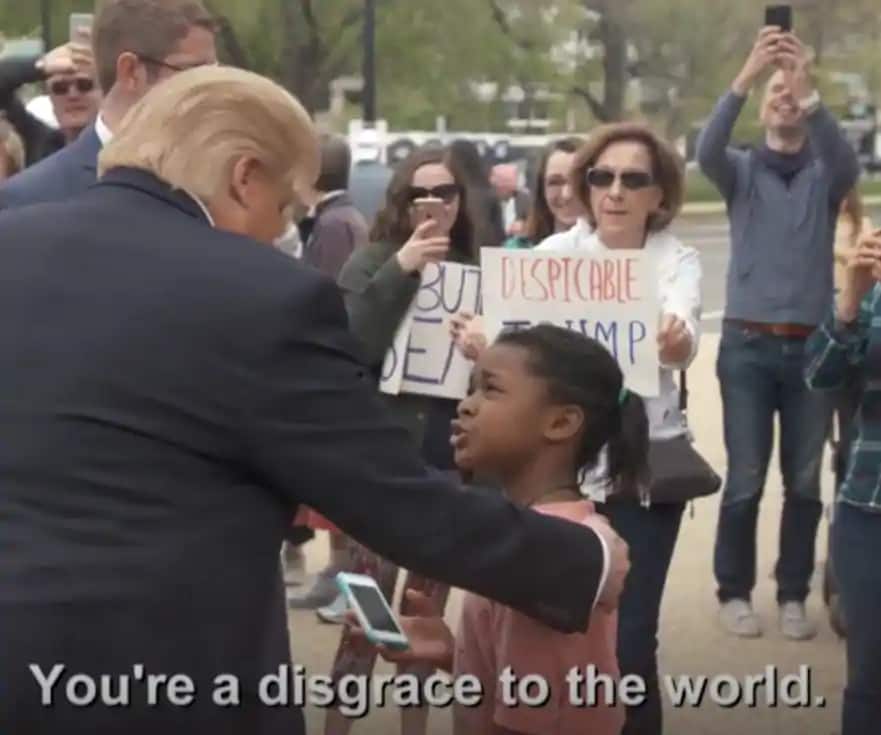 Trump Has No Shame

When you’re Donald Trump, even little girls are worth screwing over if it saves you a few dollars in the end.

You probably remember the kids in question. The little girls quickly became a viral sensation after performing at a Trump rally, when many people began to liken their disturbing performance to performances used to honor North Korean dictator Kim Jong-Un. Dressed in their star-spangled-banner best, the girls performed a creepy pro-Trump song that dismissed all other candidates as being obvious evil enemies of the state and the world in general. They are known as the “USA Freedom Kids,” and they are now suing the Trump campaign, the Washington Post reports.

The Donald demanded, and then did not pay for services rendered.

The song the USA Freedom Kids performed, which lauded Trump with glory and praise, was written by the father of the littlest USA Freedom Kid, who also manages the group. And now, the once fervant Trump supporter is suing the Trump campaign in what has become a pretty common theme.

Creator and father Jeff Popick states that the Trump campaign violated agreements set forth between the two of them verbally, and by doing so, subsequently “stiffed” the USA Freedom Kids of monetary compensation for their performances.  Popick states that the mishaps began in Pensacola, during the first performance, which, if you want to be creeped out, you can watch in the video below.

Popick reported that he spoke with  various people within the GOP nominee’s campaign, including former campaign manager Corey Lewandowski. He originally asked for $2,500, but the Trump campaign countered with an offer that would give the USA Freedom Kids a table at the event, where they could pre-sell their albums. Popick agreed, but stated that no table ever showed up — in fact, Popick says that the entire rally was a complete, disorganized mess.

The USA Freedom Kids had spent money on promotional materials for the table that never showed up, and Popick states he also lost several promotional opportunities due to the campaign, but he could get no one from the Trump camp to speak with him.

That, the Washington Post reported, was the “first of a series of broken promises and unreturned phone calls that went on all the way to the Republican National Convention in Cleveland.”

But a Trump representative did finally reach out to Popick, extending an olive branch of sorts. The Trump rep asked if the USA Freedom Kids could perform again for an event Trump was holding for veterans in lieu of participating in he GOP debate. The event was scheduled for the next day, and Popick was told that the exposure for the girls would be “huge.”

He agreed. Popick and the USA Freedom Kids packed up and boarded a plane, only to be told upon arrival that they were not needed to perform. However, the Trump campaign threw them a bone and said they could come to the veterans event, which they did, dressed in their red, white and blue dresses.

But, Popick says, they were forbidden by the Trump campaign from speaking to the media, which hurt their exposure.

“They just were constantly coming over, wanting pictures,” Popick said of the news media. “They wanted to take pictures, they wanted to ask questions — and I had to be a real jerk.”

The cost of the flights, rental car and hotel were all absorbed by Popick — in addition to the promotional materials he had already purchased, as well as the time and effort of the three little girls who can’t even help it that their dads love Trump and are obviously the real victims in this.

So now, Popick is suing the Trump campaign in order to recover expenses and other monies lost during his dealing with the campaign, although he will not specify the amount.

Trump Still May Have This Guy’s Vote

“These are guys that insist they’re straight shooters. ‘You may not like what we’re going to say, but we mean what we say and we say what we mean’– and they just would not say anything of any substance!”

“I’ve invested a lot of time, effort, money,” he continued, “and it’s just been complete silence.”

And of course Popick has taken this personally. He was such an ardent Trump supporter that he actually wrote a song about his love for Trump and even now, after his own daughter got stiffed by the Republican front runner, Trump’s treatment of the USA Freedom Girls may not lose Trump a vote.

So even after Donald financially screwed him, this guy still thinks the GOP nominee may have his vote, which may be the scariest part of the story. Because remember — it’s not just this guy. The Donald has actually convinced a segment of the population that he is worthy of being President of the United States of America.

There is just no accounting for taste.