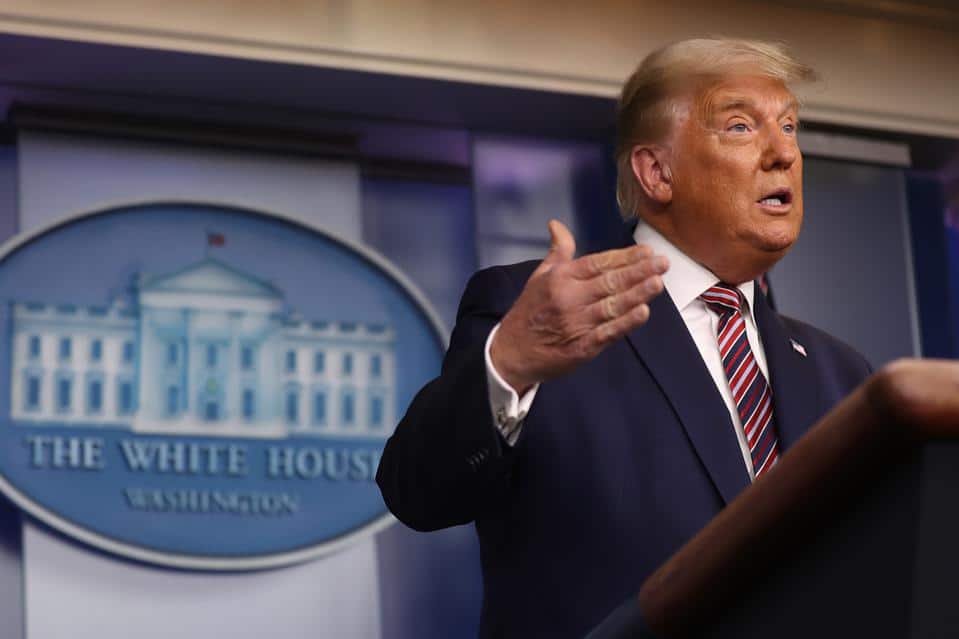 Trump Is Headed To Trial For An Impeachable Offense, But You’d Barely Know It

As has been reported ad nauseum by, well, everyone, Donald Trump is having a weird, bad, manic, meltdown, erratic, controversial, unorthodox week. It began with the Republican presidential candidate attacking the Khan family, whose son died serving his country in Iraq, and who criticized Trump at the DNC. And the weirdness has gone into overdrive in the last couple days. Each day features a fresh batch of outrageous controversies, such as Trump yelling at a baby or criticizing firefighters. These are things you just don’t do, yet he remains within shouting distance in the polls of the Democratic candidate, Hillary Clinton.

Wednesday’s controversies included Trump not endorsing Paul Ryan, but Trump’s Vice Presidential nominee Mike Pence IS endorsing him. Having it both ways?

Another top controversy is the report that Trump asked why the US can’t just use nuclear weapons. On his Morning Joe show, Joe Scarborough said

“several months ago, a foreign policy expert on the international level, went to advise Donald Trump, and 3 times, he asked about the use of nuclear weapons. Three times he asked, at one point, ‘if we have them, why can’t we use them?’”

The other pundits and guests on the show were understandably speechless at this revelation.

The media is piling onto this story. A potential Commander-in-Chief who doesn’t understand nuclear deterrence?! There is no question that that is alarming. But at least one writer at the Washington Post had “a few questions for ‘Morning Joe.’” These boiled down to: Who is this “expert,” Why are you telling us this now after “several months,” and When did you stop being one of Trump’s chief enablers in the mainstream media?

Every day, Donald or his allies release new controversies like rabbits hopped up on Red Bull. And the media chases these crazy rabbits across a field of newsprint until they collapse, exhausted, drooling into their thesauruses, unable to conjure more synonyms for “erratic” and “unprecedented.”

And are those headlines really so bad for him? He’s refusing to endorse the Republican establishment (Speaker Paul Ryan, former Republican presidential candidate Senator John McCain). But this could burnish his anti-establishment image.

Obama called Trump “unfit for the presidency.” But this could just provide more red meat for Republicans and other Obama haters.

Mother Jones discovered that Trump’s most ardent supporters don’t know or don’t care that he attacked the family of a war hero, who happen to be Muslim. In fact, many applauded him for ‘defending himself.’ While the mainstream media and the liberal political messaging organs could talk about little else for days, they were apparently having zero effect on Trump’s base.

Donald accurately observed in January that, “I could … shoot somebody and I wouldn’t lose any voters.” Trump’s unorthodox efforts to gin up negative headlines about himself, and thereby dominate the news cycle every day during the primaries, worked. He won the Republican nomination. Now the general election is in full swing, and he’s doing it even more.

A key aspect of this strategy is to really distract the media when a headline that is actually very bad for Donald comes out. Whenever there are new polls that show him losing, a new report that shows he’s really in hot water legally, or a report suggests something really shady in his business dealings, Trump’s distractions go into overdrive.

I reported on this pattern in June. Trump attacked judge Gonzalo Curiel, adjudicating over a class action fraud lawsuit against Trump University. Donald said Curiel had a “conflict of interest” because he’s “Mexican.” This parroted a report at the time that Trump had a “conflict of interest” because he owed a fortune in personal debt to foreign banks. Earlier, Trump called for his ban on Muslim immigrants the same day that Ted Cruz first eclipsed him in polls in the Iowa caucus. And on two separate occasions, Donald used unprecedented rhetoric accusing China and Mexico of “raping” the United States in trade deals at the same time that a suit was filed and refiled alleging that Trump had raped a young girl years earlier. Appropriating the phrases “conflict of interest” and “rape” seem to be an effort to hijack the algorithms of social media newsfeeds that now serve as the main news source for many Americans.

Trump is many things. Erratic, irrational, unfit and unqualified to be president may certainly be among those things. But he has also proven to be a master of media manipulation. And the big news that landed Tuesday evening, that the media has largely ignored because it is too busy chasing Trump’s crazy rabbits, is that the same Indiana-born federal district court judge Trump attacked for being “Mexican” in June, has ruled that plaintiffs have enough evidence to proceed to trial in their fraud and racketeering charges against Trump. Curiel ruled

that there were genuine issues of material fact for trial as to whether Trump had personally committed fraud and racketeering.  If Trump loses, he is liable for three times the damages suffered by the students who paid tuition.  That is the bite of the RICO statute — triple damages.  This could amount to many tens of millions of dollars.

Yes, the Republican presidential candidate is heading to trial soon to face fraud and racketeering charges in a federal class action lawsuit. When was the last time you could say that? All of Trump’s crimes against policy, basic civility, threats against civil rights, are peanuts compared to this. Though grave, alarming and unprecedented, they are as yet hypothetical crimes or political transgressions that infuriatingly fall within the parameters of what is allowable or at least forgivable under the Constitution. But Donald is headed to trial in a case that, if he loses, would be the kind of high crime or misdemeanor that the Constitution allows for Congress to remove a president from office for committing. Trump’s enemies would have a valid reason to impeach him and remove him from office before he’s even sworn in if he loses this case.

All of Trump’s seemingly unhinged behavior may be symptoms of a truly erratic personality cracking under pressure. But, for nearly a year, Donald has displayed a pattern of saying and doing anything he can to distract from the headlines that would truly undermine him among his most ardent supporters, those who don’t care what he says or does, those who would vote for him even if he shot somebody. Those supporters are largely convinced that he is a successful businessman and a political outsider. If they learn he’s facing serious fraud charges, that could pop the balloon of his image that he’s created for them. He must protect it at all costs. He doesn’t care how much his behavior appalls CNN and John McCain, as long as unemployed steel mill workers in Ohio think he’s going to smash the system for them.

The ongoing and accelerating controversies also cause the kind of psychological disorientation that would build up to a big con job, or in this case, an extremely unusual presidential election. How Donald pitched his University to the marks and how he’s selling his campaign are likely the same: long-term mass hypnosis by overwhelming the senses and wearing down the mind’s normal defenses against taking a huge risk. It’s happening to the media right now, and the media is mostly unwittingly helping Trump do it to the American voter.

This is not to say that Trump is such a devious mastermind that he can’t be stopped. He’s behind in the polls for real systemic reasons, and because of how he conducted his campaign, in a way that will be difficult to overcome. But in their eagerness to chase every controversial story that Donald lobs their way, the media seems to be almost doing him a favor: covering the surface stories Trump wants them to cover, while not digging into the substance of his shady past that Trump would rather that voters didn’t know.