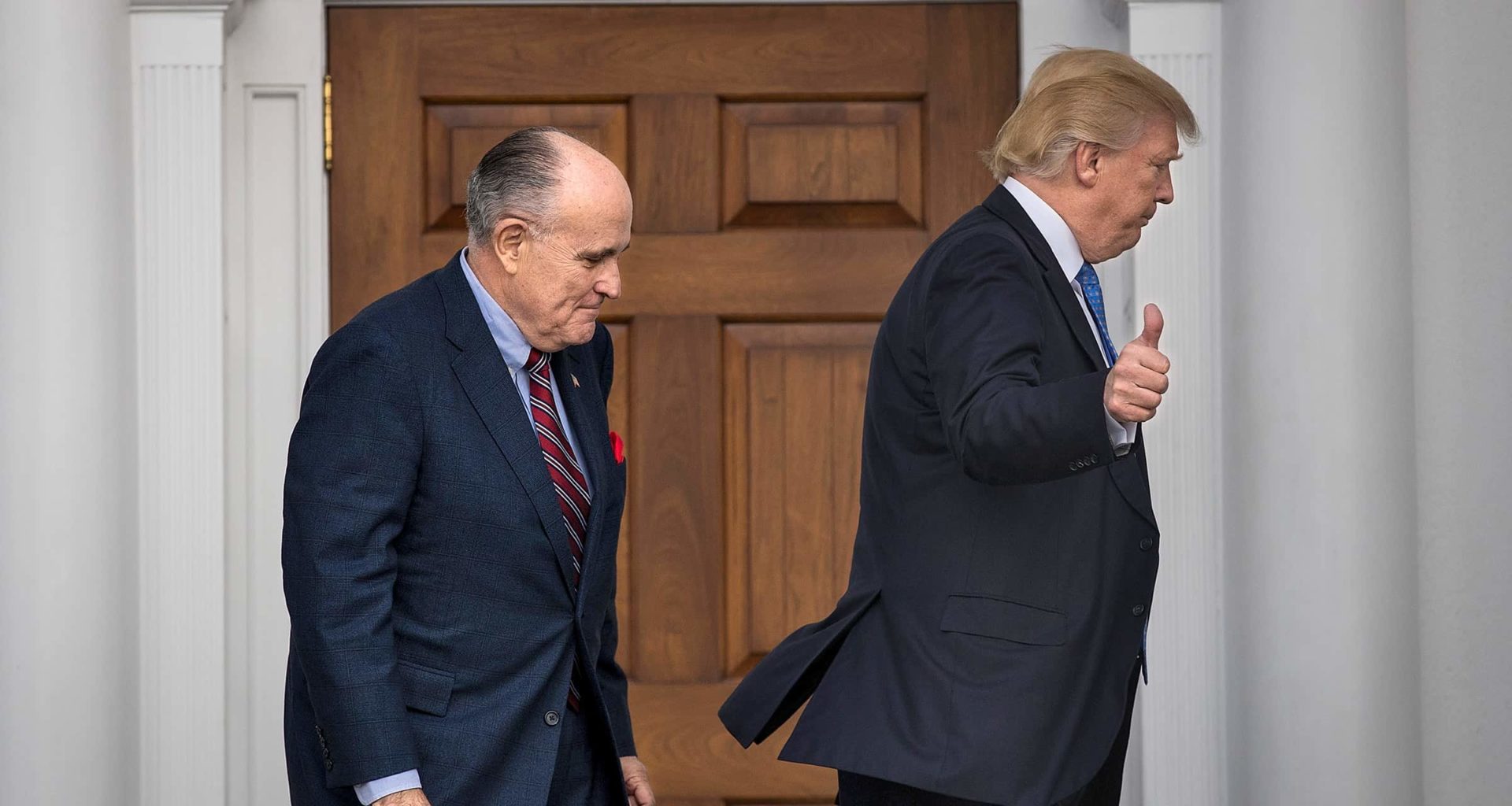 After Hillary Clinton mopped the floor with Donald Trump’s gauzy orange coif Monday night, he wallowed in denial, claiming he’d won. Reality apparently caught up with the Trump campaign after a couple days, and they began rolling out a new, disgusting strategy. The campaign is done talking about the issues (if it ever started) and is now going to talk about Bill Clinton’s infidelities, which scandalized the nation in the 1990s, and try to blame them on Hillary. Politico reported Thursday

In the wake of Clinton’s strong showing at Hofstra on Monday night, the GOP nominee repeatedly patted himself on the back for having the self-restraint to eschew the scandals of decades past – a Trump classic stratagem to get everyone else – but, no, not him — to talk about the most humiliating chapter of the Clinton marriage and shift the narrative away from his shaky debate performance.

But when a New York Times reporter asked the first female major party nominee late Thursday on her campaign plane if it was her responsibility to “speak out on a spouse’s indiscretions or past,” Clinton icily answered with a single word.

Meanwhile, Trump – who spent much of his pre-political career boasting about his sexual prowess and commenting on the physical appearance of women – stoked a fire he himself had sparked. When a reporter asked him on Thursday if Bill Clinton’s affairs reflected on Hillary Clinton, he offered a verbal wink.

TheWashington Post details how high-profile Trump surrogates Newt Gingrich and Rudy Giuliani–both men with their own histories of marital infidelities–have begun harping on Bill’s past to the media. Giuliani said

“Hillary Clinton is ‘too stupid’ to be president because she appeared to not know her husband was unfaithful to her. David Bossie, Trump’s deputy campaign manager, accused Clinton of being an ‘enabler.’”

Meanwhile, Chelsea Clinton told Cosmopolitan that Trump threatening to talk about her dad’s sexual history is

“a distraction from his inability to talk about what’s actually at stake in this election and to offer concrete, comprehensive proposals about the economy, or our public school system, or debt-free college, or keeping our country safe and Americans safe here at home and around the world.”

Talking Points Memo dryly observed the absurd irony of Trump’s new position with the headline, “Proud Adulterer Blames Woman For Not Stopping Husband’s Adultery.” But beyond the hypocrisy, this race is about to get a lot darker if the media can’t stop itself from chasing Trump’s crazy balloons.

Related: 150 Years Of Feminism And Racial Progress Will Be On The Ballot In November

Trump actually telegraphed where he’s about to try to take this race way back in April of 2015, a couple months before he’d even officially entered the race. He retweeted a supporter, saying, “If Hillary Clinton can’t satisfy her husband what makes her think she can satisfy America?” @realDonaldTrump #2016president”

Hey @realDonaldTrump – In case you’re looking for that tweet you deleted .. I got it right here. pic.twitter.com/a6F98q5xGU

Having been thrashed in a policy debate, Trump is going to try to turn this election into what he knows best, the “debate” of a high-profile celebrity divorce, dragged out in tabloids. He isn’t going to just wade into the muck of calling Hillary an “enabler” of her husband’s infidelities. Oh, no, that’s just Round One. He’s going to sink to a level we’ve never seen in a presidential campaign, if the media lets him get away with it. He’s going to try to convince the American people that because Bill cheated on her, she was an unworthy wife, and the country should divorce her. And Trump will insert himself into Clinton’s marriage as the alpha male unsatisfied with a shrewish wife. How do I know that? Because he’s done it before.

In 1990, Vanity Fair published a long, gossipy exposé on Donald and Ivana’s crumbling marriage, and the (true) rumors of Donald’s affair with his future wife, Marla Maples. Donald had been seeing Maples for a while. He had Ivana in Mar-a-Lago and Maples in Atlantic City. He decided that with the new property in Atlantic City, he was also going to have a new, younger wife to rule the city with. But he didn’t dump Ivana all at once.

Trump began slowly eroding his wife’s confidence. So she got plastic surgery. He started berating Ivana and began giving her ultimatums, leaving her vulnerable as she was trying to launch her own business. He stoked the media frenzy about him and Maples and began publicly humiliating Ivana, at one point saying in a press conference that he had made Ivana a “brilliant manager” of Plaza hotel, and he would “pay her one dollar a year and all the dresses she can buy.”

By the time he got around to actually divorcing Ivana, Donald had dragged the mother of his three oldest children through an enormously embarrassing ordeal, but he had cemented the image that she was a lackluster wife and he, the rising alpha male, was moving on to better things. But he wasn’t done toying with her.

In 1997, after a brief marriage, Ivana was divorcing Riccardo Mazzucchelli. And who was in the background stirring up trouble in the media for both of them? In July, 1997, People reported,

Riccardo, too, claims to be heartbroken. “I loved Ivana a lot, and I think I did my very best. I did for her more than Donald ever did.” Though bound, like Ivana, by a confidentiality clause in their prenuptial agreement, he clearly is on the defensive—especially given the accusations of moneygrubbing, not only by his wife’s pals but by sources in Donald’s camp. “I’ve been crucified by the press,” he complains. As for Donald, Mazzucchelli says, “he’s done nothing but knife me in the back. Maybe he’s jealous.”

According to a source close to Trump, Donald believes that Ivana has decided who is the better man. “Everybody knows that Ivana’s in love with me,” he told friends. “This guy tried to compete with me from the start, and Ivana used him to get to me. She’s disappointed that it didn’t work out on any level.” (“That isn’t true,” claims her publicist.)

After gaslighting, publicly humiliating and leaving his wife for a younger woman, Trump then manipulated the media to cause problems in her next marriage, creating suspicions of jealousy and greed between the two. His narcissism is so great that he not only wanted a trophy wife, but also a trophy ex-wife, a woman who couldn’t stay married because she still loved Donald, supposedly, but couldn’t have him. If there’s a better example than this for psychopathic misogyny, I’m drawing a blank.

Trump is now gearing up to do to Hillary Clinton what he did to Ivana. He wants the nation to see her as an unsatisfactory wife. In Trump’s mind, a man only cheats if his wife is sub-satisfactory. That was the message leading up to his divorce from Ivana, and that is the message right now that he wants the press to repeat unwittingly, and that he wants voters to subliminally hear.

He does not care one iota that it’s hypocritical of him that he cheated on his wife, but now is going after Bill Clinton for cheating on Hillary. In fact, in his worldview, it helps him. Just as he inserted himself into Ivana’s second marriage, via innuendo, he is going to insert himself into the Clintons’ marriage. If he succeeds in convincing the nation that Hillary is unsatisfactory because Bill cheated, then the final act of this disgusting charade is going to be that Donald Trump is–TA-DA!–Bill Clinton, the unsatisfied alpha male unluckily married to Hillary. Yes, the first major female presidential candidate, and one of the most qualified candidates ever to run for the office is about to be subjected to the profoundly sexist attack that her husband should have divorced her, and now the nation can make it right.

In his divorce with Ivana, Donald managed to retain 51% control over Mar-a-Lago, and gave Ivana 49%. Perhaps he thinks he can pull off the same thing with Hillary if he convinces enough voters that he deserves a 51% settlement in an election he is going to try his damnedest to turn into a gossipy, melodramatic divorce.

The Clintons have seen this coming from a mile away. That is why Chelsea Clinton is speaking up for the family. The Clintons are saying, “Look, this is our loving daughter. Our marriage is intact. Our family is intact. She speaks with the voice of both of us.”

To be clear, I don’t think this is going to work, even if the media does chase it like a curious puppy. And there are already signs that Trump has exhausted his goodwill with the media. Exhibit A is this Washington Post headline, “Trump campaign to media: Trump showed great restraint in not mentioning Bill’s affairs. Also, please write about Bill’s affairs.”

I think it won’t work because Trump has dropped precipitously in the national polls whenever he unfairly attacked an individual. He viciously and personally attacked Judge Gonzalo Curiel, who was born in Indiana, because Trump said he was “Mexican.” He attacked the Khan family, whose son died in Iraq, and who waved a Constitution at Trump during the Democratic National Convention. Both times his standing in the polls plummeted. He makes American voters most deeply uncomfortable when he is viciously, unfairly attacking an individual. Hillary may garner less sympathy than a private citizen, but the same principle of deep unfairness correlating with falling fortunes should still apply for many voters.

But it’s clear that Trump is going to try this, because his top surrogates are already advancing his pawns. He got whipped in the arena of policy debate. So now he’s going to try to turn this election into the only arena he knows how to manipulate: tabloid headlines. And the American people are about to get a real lesson in the sexist gauntlet the American woman has been forced to smile through on her march from Seneca Falls to the White House. Yes, this is what the highest, hardest glass ceiling is going to look like right before it shatters. Pure psychotic misogyny.