The Verdict is In: Bernie Sanders Wins First Democratic Debate by Huge Margin 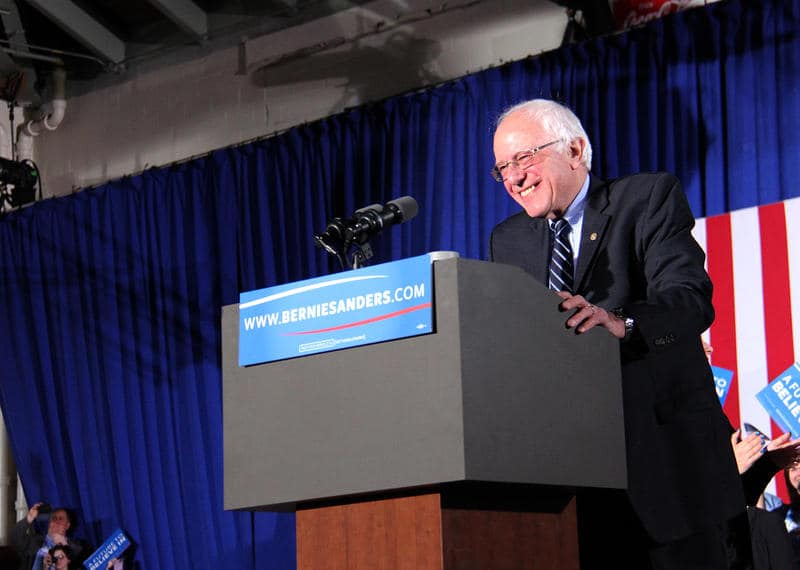 The web is buzzing after the first Democratic debate, and the big winner definitely seems to be Vermont Senator Bernie Sanders. The candidate has been a surprise hit this primary election season, but has suffered from a lack of name recognition among mainstream Democrats — a problem that may all but vanish after his stellar performance at the debates.

A number of online outlets seem to indicate a majority of internet users believe Bernie Sanders won the debate. Google search data and gains in social media followers also support this outcome. One of the most significant victories comes from CNN’s Facebook poll, which declares Sanders as the winner with 82 percent of the vote. By contrast, Hillary Clinton managed to get 11 percent, Martin O’Malley got 4 percent, Jim Webb garnered 2 percent, and Lincoln Chafee took away one percent of the vote.

Smaller online polls also reflect a Bernie Sanders victory. A poll of Daily Kos readers has Sanders winning with 55 percent to Clinton’s 38 percent. O’Malley managed 2 percent, while Webb and Chafee tie for one.

Local news stations also got in on the action with online polls of their own. Fox 5 San Diego has Bernie Sanders winning with 77.03 percent of the vote, compared to Clinton’s 15.34 percent. Webb edges out O’Malley with 3.43 to 2.61 percent, while Chafee doesn’t even crack one percent.

Likewise, the Knoxville News Sentinel has Sanders winning with 63 percent of the vote.

The results are almost too overwhelming and numerous to list in their entirety. Readers of Time magazine said Bernie Sanders won 69% to 16%. Readers of the Telegraph likewise declared Sanders the winner. C-SPAN’s Facebook poll results were also overwhelmingly in favor of Sanders.

Critics will inevitably point to the unreliability of online polling, and they have a point. Sanders enjoys a large online following, and his grassroots campaigners have been known to swarm social media with support. The online polls, then, should be viewed as only one piece of evidence indicative of Sanders’ victory at the debates. There’s far more evidence at hand which supports this conclusion.

Winning, however, is a somewhat difficult concept to define within the parameters of this debate. The candidate who “wins” does so not merely through popular opinion, but in terms of actual gains made to their campaign. Perhaps unsurprisingly, Sanders comes out on top in this aspect, as well.

Google search data confirms the candidate received massive traffic spikes for terms relating to him and his political ideology, while interest in Hillary Clinton remained stagnant. This wave of exposure will be reflected in the next round of national, scientific polls — and we will find out, once and for all, if Bernie Sanders’ ideas really do resonate deeply with the American public.

Bernie Sanders may have won in another important area: financially. According to a campaign email, Sanders raised $1.4 million from 44,000 individual donors on the heels of the debate. Those numbers aren’t just impressive, they’re unprecedented — nearly unheard of in modern American politics.

TELEVISION PUNDITS GIVE DEBATE TO HILLARY

Viewers of the debates may have noticed an odd phenomenon among the post-debate commentators . Despite CNN’s own polling reflecting otherwise, they overwhelmingly declared Clinton, not Sanders, the winner. The available data, however, seems to indicate otherwise.