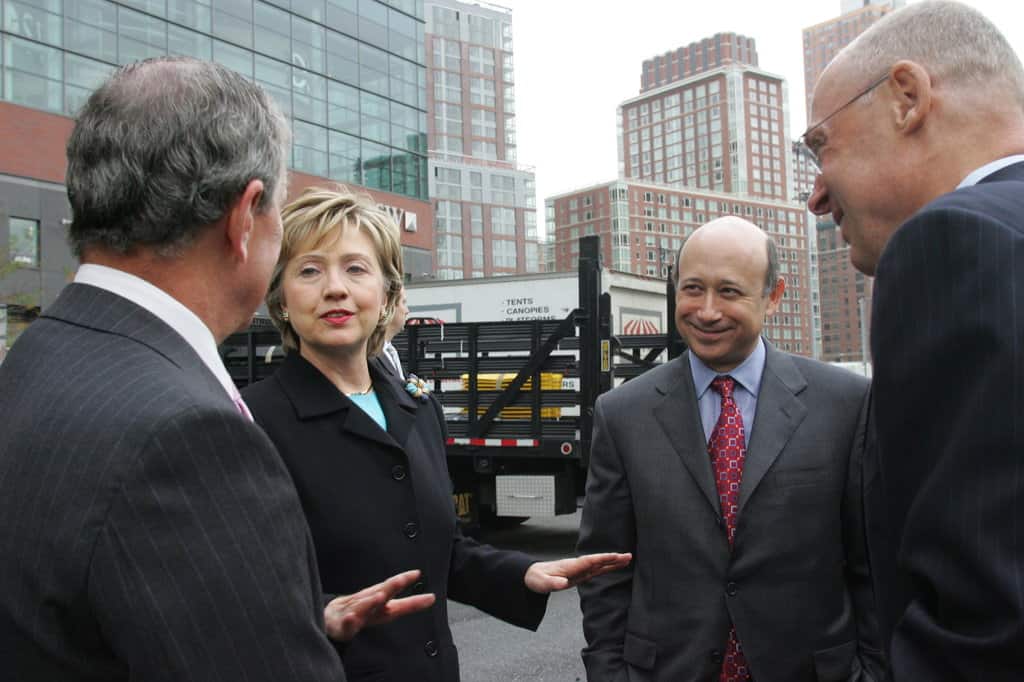 One of the many criticisms lobbed at Hillary Clinton in this election is that she’s politically wishy-washy and has a tendency to talk out of both sides of her mouth. A recently uncovered video shows exactly that — Clinton taking a lukewarm approach to assigning blame for the collapse of the housing industry. She took a middle-road stance in a video that reveals what pundits are calling “fake tough” on irresponsibility in the financial industry.

According to Clinton, those to blame for the foreclosure crisis at the time were Wall St., mortgage lenders and homeowners side-by-side — and that’s not entirely accurate.

Now to Clinton’s credit, she did ask Wall St. nicely to “cut it out” or she might just draft up legislation to force their hand. And she did place a lot of the blame on subprime mortgage lenders and rating agencies, she blamed Wall St. for inflaming the problem, but one group who was NOT to blame were the average homeowners — but she blamed them too.

Here is the clip, (full video below):

During a speech at NASDAQ headquarters Dec. 5, 2007, Clinton said:

“Now, who’s exactly to blame for the housing crisis? Well, that’s always a question that the press and people ask and I think there’s plenty of blame to go around.

“Responsibility belongs to mortgage lenders and brokers, who irresponsibly lowered underwriting standards, pushed risky mortgages, and hid the details in the fine print.

“Responsibility belongs to the Administration and to regulators, who failed to provide adequate oversight, and who failed to respond to the chorus of reports that millions of families were being taken advantage of.

“Responsibility belongs to the rating agencies, who woefully underestimated the risks involved in mortgage securities.

“And certainly borrowers share responsibility as well. Homebuyers who paid extra fees to avoid documenting their income should have known they were getting in over their heads. Speculators who were busy buying two, three, four houses to sell for a quick buck don’t deserve our sympathy.”

Clinton didn’t just blame homeowners once, but twice in this speech:

“This is a moment for shared responsibility in America. Investors, lenders, and homeowners all have a part to play and sacrifices to make. If the agreement is inadequate, or the talks fail outright, the cost to our economy will only increase.”

The burst of the housing bubble was 90 percent the responsibility of financial lenders and Wall St. as well as regulators, financial experts agree, so blaming the average Joe for buying a home for his family is outrageous. Blaming the homeowners is tantamount to victim-blaming and was an oft-repeated part of conservative rhetoric during the time.

Peter Wallison, from the conservative think tank American Enterprise Institute, which has ties to the Kochs, railed against subprime borrowers and fervently blamed Fannie Mae and Freddie Mac for lending to low-income minorities (conservative speak for blaming black people for owning homes). Conservatives, who believe in rugged individualism, blamed people, not banks. So it’s worrisome to hear Clinton repeat right-wing talking points to spare her Wall St. friends all the blame.

Was It Black Women’s Fault For Trying To Buy A Home And Being Duped Into A Bad Loan, Hillary Clinton?

My colleague Marc Belisle reported that the subprime lending was not only criminal but also overtly racist and sexist. Wells Fargo saw the black community as easy targets, and they were pushed into subprime loans even if they qualified for prime loans. Women were also targeted more often than men, with black women topping the list of being the most often victimized.

These are two of Clinton’s most key groups she gets her support from, minorities and women. So when she said “homeowners all have a part to play and sacrifices to make,” was she talking about her two prize demographics?

Or did she mean her former constituents? US Uncut points out:

“Out of all 50 states, Hillary Clinton’s constituents in New York were some of the hardest hit by the foreclosure crisis. The U.S. Department of Justice’s $13 billion mortgage fraud settlement with JP Morgan set aside an entire $1 billion in restitution just for New York homeowners, out of a total $4 billion allocated for consumer relief. The bank was sued for selling mortgage-backed securities to investors, knowing full well the investments were bogus.

“In 2014, Bank of America paid a larger $16 billion settlement for committing the same crime in the years leading up to the financial meltdown. While Bear Stearns helped package mortgage-backed securities for JP Morgan, Bank of America’s partner-in-crime in peddling bogus securities was Merrill Lynch. Out of the $16.65 billion, $300 million was set aside for New York homeowners. The loans Hillary Clinton referred to in her December 2007 speech, in which potential home buyers pay extra fees to not disclose their income, accounted for 40 percent of new mortgages between 2006 and 2007, according to Forbes.”

While I highly doubt Clinton doesn’t care about her constituents from New York and does what she thinks is best for minorities and women, it’s the double speak that gets under my skin. And to Clinton’s credit, this is another issue she seems to have “evolved” on. She likes to use that phrase whenever she is caught in a flip-flop. And this is one major flop.

Is Clinton “fake tough” on Wall St. and the financial industry because they were, after all, some of her biggest donors to her campaign for the Senate re-election and her candidacy in the 2008 Democratic race?

“Wall Street executives were the largest donors to both her 2006 Senate re-election bid and her 2008 presidential campaign. Employees of just eight banking firms gave $2.67 million to those campaigns, according to data compiled by the Center for Responsive Politics, a nonprofit research group.”

There’s a rule that you don’t bite the hand that feeds you.

So perhaps when Clinton said during the first Democratic debate that in 2007 when she went to Wall St. and told them to “cut it out” her opponent Senator Bernie Sanders (Vt.) hung his head and laughed — and rightfully so.

Clinton did draft a proposal to protect homeownership, but it died before ever reaching a committee. According to The Daily Beast  Congressional records show that Clinton proposed 140 bills in the Democratic-controlled Senate, and of those, only five involved housing finance and foreclosure — and all of them were dead in the water.

In fact, the most significant action Clinton took during this time was voting to bail out the big banks. The Daily Beast reports that she voted for the $700 billion bailouts known as TARP while Sanders voted against it.

But going back further, donations aside, it was Hillary’s husband Bill who ultimately opened the door for the kind of greed that occurred in the financial industry to cause the collapse in the first place. Sanders and Martin O’Malley, as well as other economists, both level the criticism that the repeal of Glass-Steagall via the Gramm–Leach–Bliley Act primarily led to the banks becoming too big to fail and made way for the criminal behavior from the housing and financial industry we saw before the collapse. And while it’s Hillary running for President, not Bill, Hillary could redeem herself by promising to reinstitute a similar law to break the big banks up, but she refuses.

This piece isn’t supposed to be anti-Clinton. The purpose it’s meant to serve is that if she becomes the nominee, progressive liberals need to demand real reform on Wall St. and the financial industry, not lip service, not inaction, not denial, not victim-blaming, not fake toughness, not political backscratching, not eventual evolution, but hard reform that makes Wall St. cringe at the very mention of Clinton’s name. If she isn’t willing to make an enemy out of Wall St. as easily as she has made an enemy out of Republicans, then we’ll find ourselves in another financial crisis sooner rather than later. She has put her plans to deal with Wall St. on the table, but critics say her plan just doesn’t quite cut the mustard and go far enough. It falls short of saying executives who break the rules should go to jail, instead cutting bonuses and fining large institutions for being too big to fail — and that’s all well and good, but Wall St. has shown a callous disregard for rules in the past. Are we to believe they will suddenly start under Clinton?