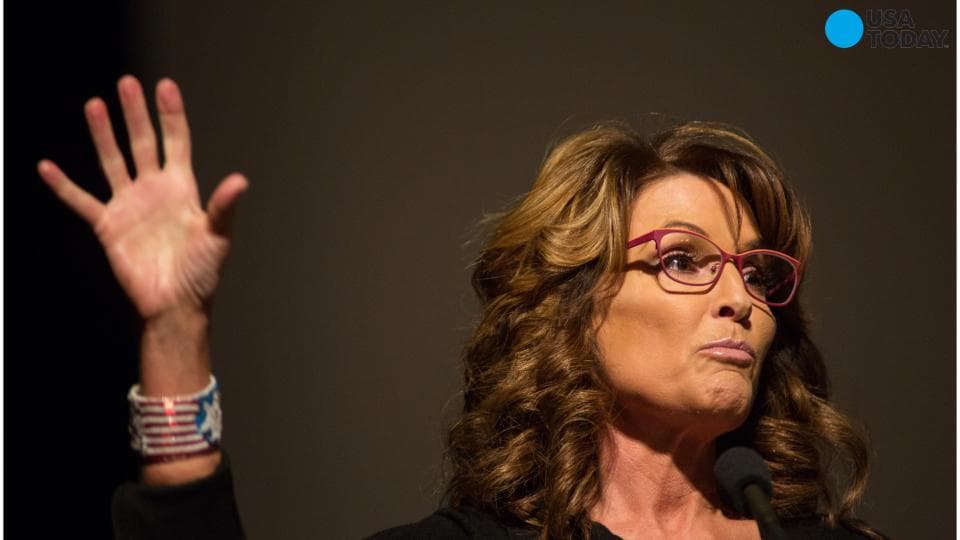 Birds Of A Feather: Palins Stick Up For Duggars, Blame Liberal Media

Like clockwork. Right on schedule. The Palins are here!  All dressed up in their Sunday-go-to-meetin’ finest. They even put their teeth in, I heard.  Ready to get in on the shit-storm that the Josh Duggar molestation debacle has wrought while simultaneously making every attempt to shine the spotlight on themselves.  It must be one of those obscure laws of physics.  Media whores attract media whores.

The former Alaska half-Governor and national laughing stock Sarah Palin took to her Facebook page, of course linking to a Bristol Palin blog post, both of which blamed the “liberal media” for attacking  poor little defenseless Josh Duggar for his past sexual misdeeds. This while ruthlessly attacking and scapegoating Lena Dunham (?!), who admitted sexual experimentation with her sister in her 2014 book .  (Read more about that here.)

Really? Is that that all the Palins can come up with? Lena Dunham – a attention-starved 20-something whose stock in trade is to shock?  They are incapable of “getting her”.  Do the Palins realize that she is not the face of the Democratic party or Liberals in general? In the real world, most people over the age of 30 probably don’t even know who Lena Dunham is.  Nor, might I point out, has Lena Dunham and her family spent their lives and “careers” in constant judgement of others, isolating and brainwashing a barn full of children, profiting from religious perversion, and politicking said extreme religious agenda. Nor has Dunham raised an unrepentant child molester who happened to be the official Homophobia Ambassador for a nationally recognized hate group.   It’s perplexing why the Palins are using Dunham as their punching bag.  Especially when her book came out in early October of 2014. Why now?

Here is Palin’s Facebook post from June 4 .  Remember, this crazy shrew was once nearly a heartbeat from the Presidency.

HEY LENA, WHY NOT LAUGH OFF EVERYONE’S SEXUAL “EXPERIMENTS” AS YOU HAUGHTILY ENJOY REWARDS FOR YOUR OWN PERVERSION? YOU PEDOPHILE, YOU

Radical liberals in media who have total control over public narratives are disgusting hypocrites, so says my daughter. Go get ‘em, Bristol!  I’m glad someone’s got the guts to call out these perverts.

The intolerant left’s destructive personal intrusions and narrow-mindedness applied to their chosen targets are bad enough, but their double standards are beyond the pale.

I’m not defending the Duggar boy’s obvious wrongdoing over a decade ago. The main victim in any story like this isn’t the perpetrator, it’s the innocent ones so harmfully affected. I’m not an apologist for any sexual predator, but I’m sickened that the media gives their chosen ones a pass for any behavior as long as they share their leftwing politics. Case in point, they suggest Lena Dunham’s sexual assault on her sibling is cute, and she’s rewarded for it with fame and fortune. Meanwhile, they crucify another, along with an entire family.

The Duggar debate needs to shift from solely the boy’s obvious wrongdoing when he was 14 years old to now include:

1) The shocking, unethical leak of a private, legally protected counseling document by a politically motivated law enforcement official. Media – time to go after her or him for illegalities and for destroying the public’s trust in law enforcement.

Such obvious double standards applied to equally relevant stories underestimate the wisdom of the public, discredit the press, and spit on the graves of every American who fought and died for the press’s freedom.

I hate for anyone to go through this game liberals are allowed to play, relentlessly attacking on an uneven playing field until a conservative’s career, relationships, and reputation are destroyed. o the media’s targets I encourage, “Rise above by never claiming ‘victim’, tell the truth, and keep the faith!”

And, for what it’s worth, “Welcome to my world; believe me – what doesn’t kill you makes you stronger!”

Following proudly in Mommy’s American flag, stripper-slut-shod footsteps,  VP of the Alaska Mean Girl Brigade, Bristol posts this on her blog. (Warning – every link to Bristol’s blog you click, you are in danger of losing not only brain cells, but valuable seconds of your time.)

Let’s get this straight liberals – what kind of molestation are acceptable?

I can’t believe how crazy the media is going over the Duggar family compared to the big fat yawn they gave Lena Dunham when she wrote in her book that she sexually experimented with her sister. I’m sorry to have to do this, but let me remind you:

In her new book called Not That Kind of Girl – according to Bradford Thomas — she writes about “experimenting sexually with her younger sister Grace, whom she says she attempted to persuade to kiss her using ‘anything a sexual predator might do.’ In one particularly unsettling passage, Dunham experimented with her six-year younger sister’s vagina. ‘This was within the spectrum of things I did,’ she writes.”

That makes me want to puke.

Oh that’s right. It didn’t happen. The liberal media darling Dunham was praised for her “honest and witty” book.

The double standards make me sick. Josh Duggar touched a sleeping girls breast – a terrible thing to go. But now their ENTIRE family is punished and their hit show is canceled? He’s labeled as a pedophile? His family is crucified!

Liberals in today’s media can do no wrong, while conservatives can do no right. [sic]

It’s obvious that neither of these women got into law school. They are so bitter, angry, hateful and ignorant. The fact that they are still in the media is embarrassing.  And again, Dunham’s book came out 8 months ago.

And shame on you, for publishing this kind of vile trash.   I thought you were supposed to be a “faith-based” website.

If you would like to read about Bristol’s outrage at Caitlyn Jenner receiving the ESPN Courage Award, read this story and this story.  It’s well worth your time.  Hilarious.  But again, pathetic.