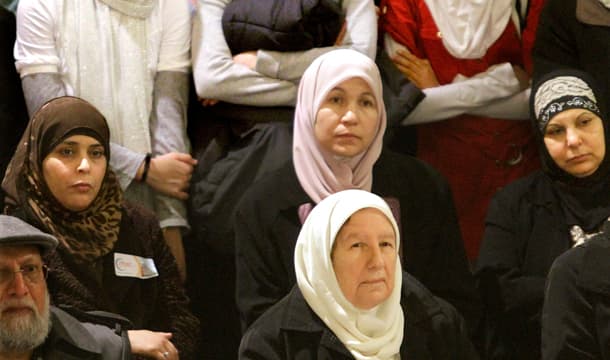 West was picking up some booze when he ran afoul of the creeping Sharia Menace. How did this foul beast manifest itself? In the form of an underage cashier.

There was a young man doing the checkout and another Walmart employee came over and put up a sign, “No alcohol products in this lane.” So being the inquisitive fella I am, I used my additional set of eyes — glasses — to see the young checkout man’s name. Let me just say it was NOT “Steve.”

I pointed the sign out to Aubrey and her response was a simple question, how is it that this Muslim employee could refuse service to customers based on his religious beliefs, but Christians are being forced to participate in specific events contrary to their religious beliefs?

Boy howdy, that is one astute young lady.

Imagine that, this employee at Walmart refused to just scan a bottle or container of an alcoholic beverage — and that is acceptable. A Christian business owner declines to participate or provide service to a specific event — a gay wedding — which contradicts their faith, and the State crushes them.

1. Is this your first time shopping? No underage cashier anywhere can scan alcohol. It’s the law. Has to do with age, and has NOTHing to do with ethnicity, gender, orientation, whatever.
2. You used your “’…additional set of eyes – glasses – to see the young checkout man’s name. Let me just say it was NOT ‘Steve.’” Ooohhhh, he’s an “OTHER!!!” eeeeeeeeeeeeee!!!! What was his name, if not Steve? Wouldn’t it make your tale of nefarious discrimination by an OTHER (eeeeeeeeeeeee!!!!) carry a little more weight? Don’t leave us hanging!
3. The employee at Walmart would not have “refused” to scan your bottle or container of an alcoholic beverage: he would not have been allowed to. See #1.
4. A Christian business owner can choose to decline to participate or provide service to a specific event – a gay wedding – which contradicts their faith. If this happens in a state where such choices are illegal, the State can indeed crush them for “breaking the law.” I thought you were all about following the laws of this nation, not Sharia law. Why do you hate American laws?

But WAIT! There’s an update!

EDITOR’S UPDATE: We spoke to the Walmart store, and apparently employees under 21 years old are prohibited from selling cigarettes and alcohol. However, that isn’t to say Walmart isn’t selectively caving to Muslim demands, such as this case regarding Halal meat in Ohio.

Nifty trick there. Admit the entirety of the original post is based on a false premise, BUT throw a nice big slab of Grade A paranoia to the rubes (it COULD have happened!). And if a Wal*Mart chose to stock Christian-themed wedding cakes, would that be “selectively caving to Christian demands?” Or is it “caving” only when they do it for the OTHERS of the community? (eeeeeeeeeeeeeeee!!!!!!!!!!!!!!!)

Yep, Alan West is one sharp guy. No Sharia Law on his watch! Nothing gets past either set of watchful eyes. Other than facts and rational thought…

God, Discrimination And The Law: Say It With Flowers