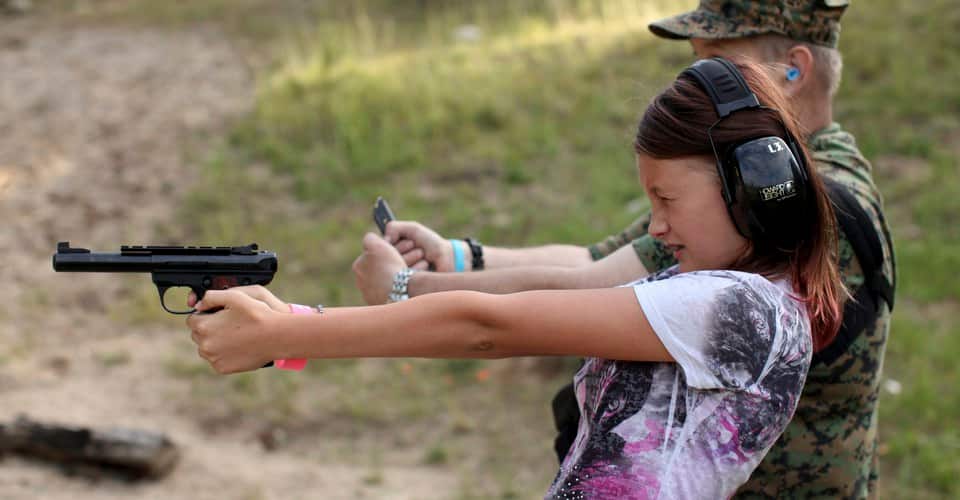 Today’s PSA on the need for gun control and responsible gun ownership comes to us via a Florida mother named Jamie Gilt. This glorious gun nut boasts a fledgling modeling career and a serious hard-on for cold hard steel. So much so that she thought nothing of driving down the road with a LOADED HANDGUN within arm’s reach of her 4-year-old son. Did it end well? Would I be writing about it right now if it did end well?

Putnam deputies are trying to figure out how a toddler got his hands on a .45 caliber handgun before he accidentally shot his mother as she drove down a highway Tuesday afternoon.

Putnam deputies found a truck and horse trailer in the middle of travel lanes on Highway 20 near Rowland Avenue just after 3 p.m.

When they approached the truck they found 31-year-old Jamie Gilt in the front seat with a bullet wound.

Gilt was reportedly rushed to an area hospital and deputies say that as of now she’s in stable condition. In researching this story, I happened across Gilt’s social media pages and I confess it didn’t exactly aid my blood pressure.

Got to play with my new toy today! Time to clean it!

This is what was tweeted out by a woman weeks before she was shot and almost killed by her 4-year-old son.

“Got to play with my new toy!”

Okay, so what we have here is yet another gun nut who views DEADLY WEAPONS as playthings. I’m not even going to get into the profile image of this woman where she’s holding what is likely a loaded rifle in one hand and her very young son in the other.

Gun worshipers like Jamie Gilt exhibit a form of magical thinking when it comes to how guns do or don’t work. Allow me to clear up a few misconceptions.

Guns have only one purpose — to kill. That’s why we call them “deadly weapons.”

They can and will kill someone when used for their intended purpose. It often takes skill to hit someone in a way as NOT to kill them. Yet your average gun nut will take this fact entirely for granted, to such a degree that a young child will be allowed to handle the weapon without any kind of supervision!

And don’t tell me a mother driving down the road with her eyes anywhere but on her son counts as adult supervision. That little boy likely got that weapon one of two ways: It was left in the backseat by someone or he was actually allowed to hold the weapon. Either outcome is overtly disturbing. As such, I cannot bring myself to feel sorry for Jamie Gilt,

Instead, my heart goes out to a young child that accidentally shot and could have possibly killed his own mother. That is something that he will likely read about one day. That is a type of trauma that doesn’t go away for the little boys and girls who’ve accidentally shot their one or both of their parents.

PLEASE stop thinking of guns as your personal playthings. PLEASE stop leaving these not-toys lying around where your young children can get to them and accidentally shoot themselves — or YOU!