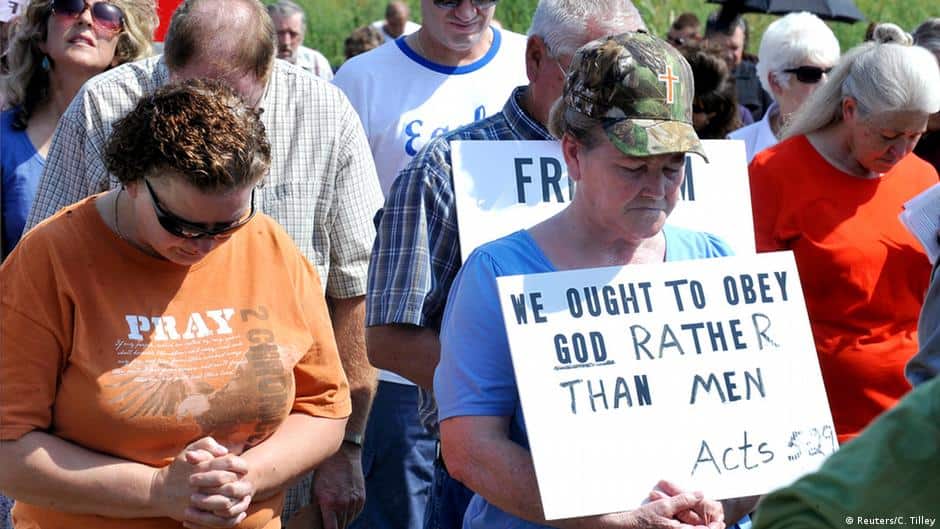 I owe Kim Davis an apology. No, not for calling her out on abusing her powers as Rowan County, Ky. clerk or for throwing a pope under the bus.

Instead, I apologize because I actually had started to think of her as something of a naive pawn. It’s been evident from early into the Kim Davis controversy that her lawyer Mat Staver had plans for his “client”. Those plans often worked against the logical best interests of Davis. It was starting to appear that Kim had no idea she was being used.

Well, the days of me thinking of Kim Davis as a naive puppet came to a screeching halt when I got wind of one heck of a bombshell discovery.

According to an exclusive report by VICE News, word has started to circulate that the Kim Davis victim narrative never had a leg to stand on. Apparently, Kim Davis had taken a proactive approach to stopping gay marriages MONTHS before the Supreme Court ruling on the matter.

“Five months before the Supreme Court’s landmark decision declaring same-sex marriage legal in all states, Kim Davis, the Rowan County Clerk in Kentucky who was jailed last month for defying a federal judge’s order to issue same-sex marriage licenses, wrote to state lawmakers asking them to back legislation that would exempt her and other county clerks from having to grant anyone a marriage license.

“Davis sent the letter to legislators about two weeks after she took office.”

Repeated for emphasis, because I kind of have to:

“Davis sent the letter to legislators about two weeks after she took office.”

Here’s what newly elected, pre-Supreme Court decision Kim Davis had to say about the possibility of having to issue gay marriage licenses.

“I can not ask my deputies to issue or be a party to ‘the implementation of a contentious societal philosophy change’ (per Florida clerk with same views) if I myself would not.

“I know the deadline is close for presentation of bills on the floor, but in light of the Supreme Court’s decision to look at this in April, I feel it [imperative] that we be ready to stand with our uncompromising convictions, holding strong to our morals.”

The Morehead News reported Kim Davis was as elected in November 2014 following a landslide victory over Republican opponent John Cox. She would succeed her mother, Jean Bailey, who held the office for 37 years. She assumed office on January 5, 2015 — and sent out emails asking about how to block gay marriage licenses about a couple of weeks after that.

Here’s the scans of the Davis emails (via VICE News). I apologize in advance for the CAPS LOCK:

It appears Kim Davis was well aware that same-sex marriages would likely be made legal by a Supreme Court decision. Apparently, she was doing her best to find a legal avenue for turning away gay couples. Or, to put it more bluntly, using her office to act out discrimination. Given the political atmosphere in Kentucky during her early days in office, there’s a reason she was confident that things would play out the way they did. You see, Obergefell v. Hodges is the landmark case that led to the June legalization of same-sex marriage.

It just so happens that two of the various cases that would all be joined together to become Obergefell v. Hodges were Bourke v. Beshear and Love v. Beshear — Two gay marriage cases being fought in Kentucky.

We’re not talking about marriage equality cases that sprung up overnight, either. The plaintiffs had been part of a fight raging in Kentucky over same-sex marriage bans for more than ten years. By the time these two cases were joined with Obergefell v. Hodges on January 16, it’s highly unlikely that Davis was unaware of them…or their implications for her office. With this in mind, Kim Davis may very well have been laying the groundwork for her future antics when she reached out via email to Republican Sen. Albert Robinson.

Because of the timing of Davis’s election and the acceleration of same-sex marriage legal victories across America, some have argued that Kim Davis might have even taken office with the full intent of blocking gay marriages. However, until corroborating evidence can be found, such accusations remain pure speculation.

For my part, I choose to believe these emails represent the intent by Kim Davis, from as early as TWO WEEKS into her role as Rowan County clerk to knowingly and willfully violate the constitutional rights of others.

Kim Davis’s email was reportedly met with a positive response by Sen. Robinson, who encouraged her to reach out to Laurel County Clerk Dean Johnson “for guidance.” VICE News is unaware what happened beyond that because neither Robinson nor Johnson responded to the site’s request for comment.

What do YOU think: Do you believe that Kim Davis always planned to abuse her role as clerk and block marriages? Share your opinions in the comments below!