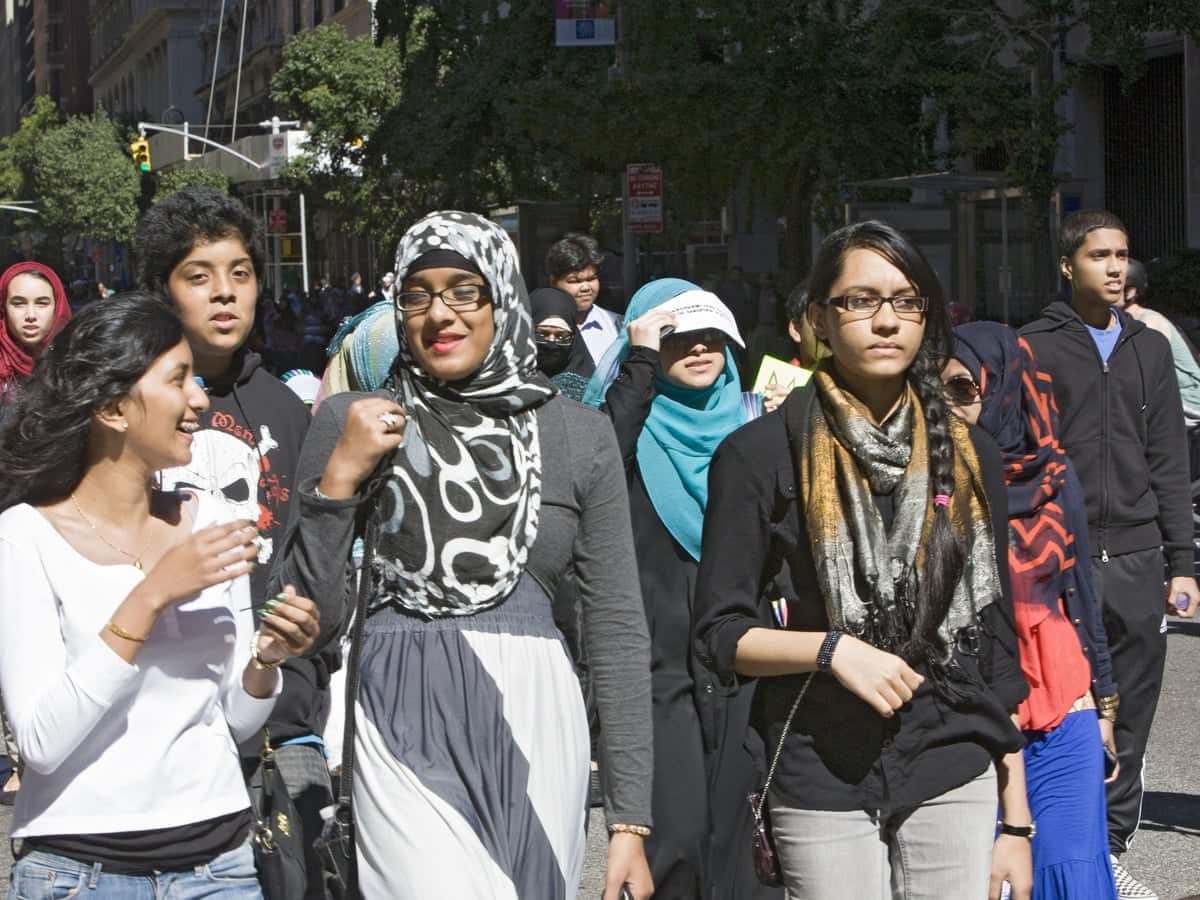 The latest installment in our ongoing series on Americans acting like Islamophobic idiots comes from Augusta County, Virginia. Seems that a world geography class included an assignment in which students were instructed to replicate, using Arabic calligraphy, the Shahada — the Islamic statement of faith. And then everyone lost their fucking minds.

“Parent Kimberly Herndon said she fcelt ‘shock that it was sent home, shock that that was in the schools, shock that this was happening right here in our small town,’ when her ninth grade son brought the assignment home. ‘I will not have my children sit under a woman who indoctrinates them with the Islam religion when I am a Christian, and I’m going to stand behind Christ,’ Herndon says. . . . Herndon labels Islam ‘a religion of hate’ and called for the teacher to ‘be fired because she had them write an abomination to their faith and causes a little girl to cry herself to sleep because she was worried she had denounced her God.’”

Herndon went on to post on Facebook, just to clarify that she was, in fact, frothingly Islamophobic:

“I am preparing to confront the county on this issue of the Muslim indoctrination taking place here in an Augusta County school. This evil has been cloaked in the form of multiculturalism. My child was given the creed of the Islam [sic] faith to copy. This creed that is translated ; There is no god but Allah [sic]. Mohammed was Allah’s messenger. This is recited during their pledge to the Islamic faith. This creed is connected to Jihad in that it is the chant that is shouted while beheading those of Christian faith, or people of the cross as being called by ISIS [sic]. Christian girls in this class were called to volunteer to adorn the apparel [sic] of Muslim women. Unknowingly these children did so. Also unknowingly they were instructed to denounce our Lord by copying this creed of Islam.”

And lest your think that Herndon was acting in isolation, people both inside and outside of Augusta County did what Americans do best, and shut the entire fucking school district down:

“Following parental objections to the World Geography curriculum and ensuing related media coverage, the school division began receiving voluminous phone calls and electronic mail locally and from outside the area. As a result of those communications, the Sheriff’s Office and the school division coordinated to increase police presence at Augusta County schools and to monitor those communications. The communications have significantly increased in volume today and based on concerns regarding the tone and content of those communications, Sheriff Fisher and Dr. Bond mutually decided schools and school offices will be closed on Friday, December 18, 2015. While there has been no specific threat of harm to students, schools and school offices will be closed Friday, December 18, 2015. All extra-curricular activities are likewise cancelled for tonight, Thursday, December 17, through the weekend. We regret having to take this action, but we are doing so based on the recommendations of law enforcement and the Augusta County School Board out of an abundance of caution.”

So that happened. A calligraphy assignment shut down a school district. What is particularly egregious about all of this is how breathtakingly stupid the entire incident is. A mother is offended because her child has unwittingly denounced her God. Here’s a newsflash, you Islamophobic cretin: the God of Christianity is the God of Islam is the God of Judaism. That is why the prophets recognized by Islam include Abraham and some guy by the name of Jesus. It is why, in Aramaic, the actual language spoken by Jesus, the word for God is “Elah,” which sounds kind of familiar to Allah. All three of the major Abrahamic religions — Judaism, Christianity, and Islam — are talking about the same supernatural entity. So claiming that a close encounter with Allah, via calligraphy, is the equivalent of “denouncing” the God of Christianity is theologically moronic.

If you have raised a child who believes calligraphy will lead to eternal damnation, you’ve failed.

And, further, let’s take a look at Herndon’s claim that “a little girl cried herself to sleep” over this incident. Assuming that Herndon isn’t simply making all this up to score cheap points, her claim raises a simple question. What the hell version of Christianity are you teaching your kids? It has admittedly been a few years since I last slogged my way through the Bible, but I don’t recall reading, anywhere, anything along the lines of “Thou shalt have no contact with any who worship Me in a different fashion or else thou shalt go directly to Hell without passing Go.” So, unless I’m missing something, there is no religious justification to be found for anyone to cry themselves to sleep over a bit of calligraphy. That Herndon’s child allegedly did so says nothing at all about either Christianity or Islam and everything about the questionable parenting of Herndon herself. If you have raised a child who believes calligraphy will lead to eternal damnation, you’ve failed.

But what makes this all the worse is that the Islamophobic attitude of Herndon has not merely done damage to her family, it has reverberated through Augusta County, and led to the shutting down of an entire school district. That’s going just a bit too far. It is not hard to recognize that Islamophobia in America is officially out of control. Armed gunmen menace mosques. Shots are fired at Muslim women in Florida. A mosque in California is firebombed. This latest incident in Virginia does not partake of the same degree of violence, but it is no less worthy of condemnation. The bizarre overreaction to a bit of Arabic calligraphy serves only to divide. It creates a needless fear of Islam. It creates hate and intolerance. And it pours even more gasoline on the Islamophobic flames that burn all over the nation. This shit needs to stop.