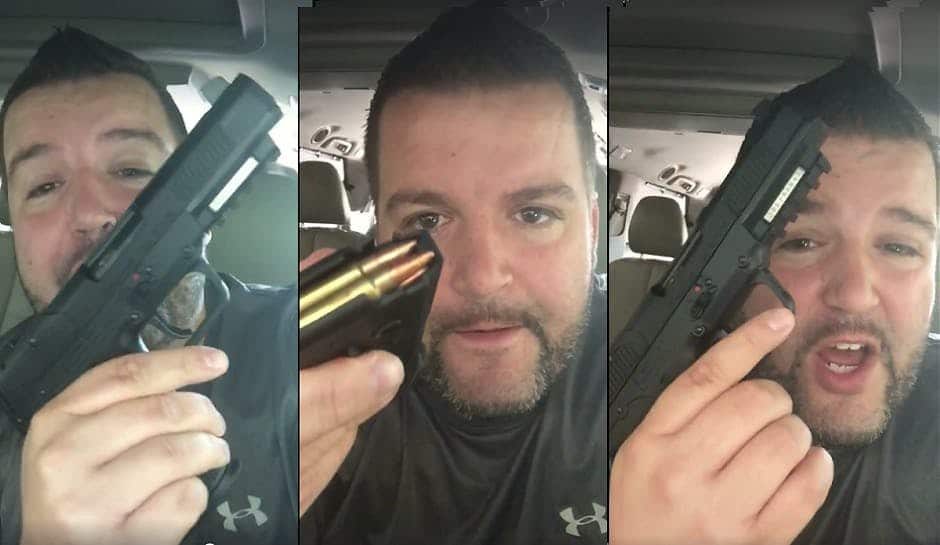 Josh Feuerstein Advocates For Making Abortion Doctors “Run And Hide And Be Afraid For Their Life.”

This. Fucking. Guy. The loudmouthed Christian Evangelical pastor from Arizona, who recently incited the entire nation to bitch about Starbuck’s holiday cups, put out a video calling for terrorism against Planned Parenthood and abortion doctors — which has since been deleted. Luckily, YouTube user Sentient Fart Cloud of Doom had the foresight to save this video that has become relevant after last week’s attack on Planned Parenthood by Christian right wing terrorist Robert Lewis Dear.

The video starts out with Joshua Feuerstein laying creepily in bed (I need eye bleach), apparently pissed off at the then-recent release of the Planned Parenthood videos. Feuerstein says in the video published on July 29:

Planned Parenthood has hunted down millions and millions of little innocent babies, stuck a knife into the uterus, cut them, pulled them out, crushed their skull with forceps, ripped their body apart, sold their tissue, and threw them bleeding into a trash bin.

I say, tonight, we punish Planned Parenthood. I think it’s time that abortion doctors should have to run and hide and be afraid for their life.

Golly, that’s so Christ-like inciting domestic terrorism and all. But, hearing this statement after seeing the reality play out in a lengthy standoff in Colorado Springs, which left one officer and two civilians dead, with five officers and four civilians wounded, it seems as though Fuckstein needs a visit from the FBI or Department of Homeland Security, and perhaps an investigation into whether Dear was a fan of his. If Feuerstein can ignite the nation over Starbuck’s holiday cups not saying explicitly “Merry Christmas” then surely his more psychotic followers wouldn’t find issue with his call to hunt down abortion doctors…

Speech that incites violence is not protected speech under the First Amendment, and make no mistake about it, this was a direct call for domestic terrorism against Planned Parenthood and other abortion providers — for performing procedures that were made legal over 40 fucking years ago.

Planned Parenthood says they are on high alert and have increased security to the best of their ability. They have denounced right-wing leaders for creating a “poisonous environment” for the women’s health center.

As for Feuerstein, he had a similar reaction when same-sex marriage was legalized — he called for an armed response to Christian persecution for that. Because what would Jesus do? Take up arms against people he didn’t agree with, according to ass hammers like Feuerstein and his abysmally dumb fans.

Feuerstein has posted a video in response saying his is staunchly pro-life, which means he values all lives, but that matters very little, he’s inciting his followers to commit acts of violence — and that’s called Stochastic Terrorism — encouraging terrorism through your fan base. Words matter, Mr. Feuerstein and playing on the fears, the deeply held beliefs of your crowd can have consequences much more tragic than nationwide outrage over the lack of holiday wishes on Starbuck’s cups.

It should be noted that Feuerstein currently has 1.8 million Facebook followers.

Here Is The Video With Thoughtful Commentary By Sentient Fart Cloud Of Doom:

And Here Is Feuerstein’s Scaredy Cat Response To The Recent Unearthing Of His Video, Which He Claims Is “Highly Edited” Bahaha, Oh The Irony: