Texas Citizens Will Use Pig Blood To Stop Muslim Cemetery 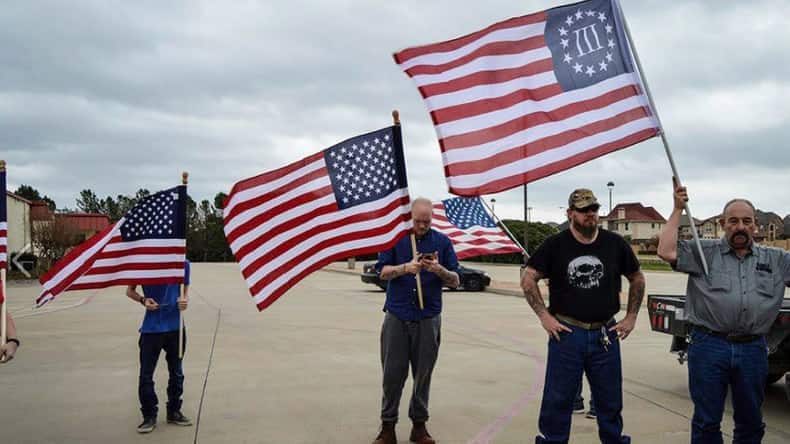 We all got to see the vitriolic hatred that sprang forth when a Muslim interfaith community center was proposed two blocks away from Ground Zero. True to fashion, however, residents in one Texas town have taken it to the next level. They not only decry any Muslim buildings in their community; they don’t want any Muslim cemetery there either.

Residents Freak Out Over Muslim Cemetery

In Farmersville, TX, there is controversy brewing over a proposal from the Islamic Association of Collin County that would allow a Muslim cemetery to be placed on undeveloped land. When residents in the conservative town of 3,000 heard about the proposal, they turned out en masse at a city council meeting to fight against it.

Citizens who spoke at the meeting, along with those who were interviewed about the proposed Muslim cemetery, listed a variety of reasons why they were against the proposal. One of the nicer comments came from a woman who barely managed to contain her hatred of the Muslim faith:

“This is not a money maker for the city of Farmersville, so regardless of whether you like Muslims or not, it doesn’t conform.”

The last part of that sentence can barely be heard on the video, seen below, thanks to the uproarious applause coming from the other residents. Of course, not all residents did as well at containing their absolute bigotry.

Some stated that they believed the Muslim cemetery would actually serve as a front for a mosque or extremist training camp. One resident said:

“I do not want to be constantly in view of a mosque. I do not want my child to be indoctrinated toward their religion.”

Right — because it’s the Muslims constantly knocking at my door trying to tell me about the good word of Jesus Christ. Oh wait… no it’s not. Dallas News reported on random residents yelling out their dissatisfaction with the idea:

“‘It’s gonna kill Farmersville,’ one man warned darkly. ‘They’re at war with us,’ thundered another.”

One woman insisted she knew the proposed cemetery was just a sham to cover up bigger plans:

“Do not tell me they are not trying to put a mosque there.”

As usual, a conservative refused to hear any facts that might not fit in with her preconceived notions of what the world is. This type of belief is actually cited in one of the many studies that prove Republicans are less intelligent than the average person.

Getting Scientific About The Muslim Cemetery

Amazingly enough, some of the residents in the heavily Republican area were able to keep their bigoted reasoning hidden long enough to call upon science to support them. Which is strange, because only 6 percent of scientists are Republican. Still, several of the aged residents went full Bill Nye while being interviewed.

“When somebody dies they bury them at that time. They don’t know whether they were shot, diseased or anything else. All they do is wrap them in a sheet from the grave and bury them.”

That was the claim put forth by one resident. He’s not right on point, but he’s only at the edge of misinformation. Why does this fear matter to him, though? Elderly female resident Patricia Munroe gave us the answer:

“The bodies are generally above the water we get rain just like we did it’s going to be in our drinking system.”

Ah, there we are. It turns out that Muslims are simply placed in shrouds before burial. Residents are afraid that Muslim bodies will contaminate the drinking water. They literally believe that, even in death, Muslims are trying to kill them.

If you look at the residents’ stated fear and think, “That doesn’t sound right, but I don’t know enough about burials to dispute it,“ — don’t worry — we delved deeper.

Of course, it turns out that these “fears” are completely illogical. In 2008, there were 12 eco-friendly burial providers in America. These are cemeteries where bodies are essentially put into the ground with nothing more than biodegradable materials around them. By 2011, there were over 300. Oh, and many of these bodies are only buried three feet deep to expedite decomposition.

“Instead of conventional wood and steel coffins, clients can bury loved ones in more biodegradable wicker or cardboard, or in a casket made of wood certified as [sustainable]. Advocates of such greener burials say that people take comfort in knowing their bodies will decompose and become part of the cycle of nature.”

You know, how EVERYONE did it in the past. There is nothing unsanitary about burying your dead without a coffin. On the contrary, it’s actually more environmentally friendly to bury individuals without coffins, but honestly, when have conservatives ever cared about being eco-conscious? Especially when facts back it up?

Still, at least some of these residents tried to cover up their hatred. Sure, they don’t want Muslims in their community, and for the Muslims who already are, residents surely don’t want them buried there — but at least they tried to hide their bigotry. This guy sure didn’t:

“Take and dump pigs’ blood and put pig heads on a post. They won’t buy the land.”

Alia Salem, from the Council on American Islamic Relations of Dallas, stated that she hopes the situation will lead to certain myths being dispelled. Honestly, though, I’ve begun to wonder why she even tries. She did nail one fact right on the head, though:

“They are fearful of what they don’t understand.”

She’s absolutely right, but unfortunately, these bigots go out of their way to ensure that they keep not understanding.