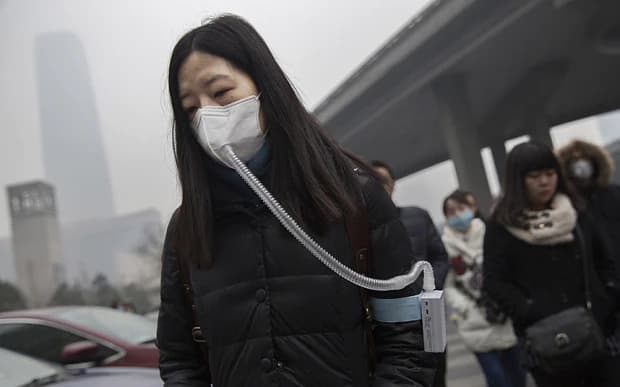 There is a shortage of fresh air in the Capital of China. Last December Beijing had its first ever red alert due to air pollution. Schools were closed and much of the city was shut down for a severe pollution warning. The air pollution problems in the Chinese capital are well known, but now some of the nation’s wealthier residents have adopted a novel, if not cost-effective solution. They are importing bottles of “fresh air”. A British entrepreneur is exploiting the desire for a lungful of crisp fresh air by selling jars of air gathered in the English country side for £80 ($115) per bottle.

He is not the first to take advantage of the demand for fresh air in China after selling a bagful of air on Ebay as a joke a Canadian company gets regular orders from China for air bottled in the Rocky Mountains. The Canadian air is a steal at $20 per bottle.

Bottled air is not the only solution for those with the funds to treat their lungs. Back in 2014 The Guardian newspaper reported that private schools including the British School in Beijing had domed sports areas for children to be able to play while breathing clean air. For those who can leave, concerns for their children’s health are driving them out of the country as one mother and teacher at the school told the paper.

“More and more ex-pat families are leaving this country for the sake of their kids’ health. So if all the other schools have a dome, then we’ve got to have a dome.”

Fresh Air Is A Luxury For Many In China

For most of the children born and raised in the city, however these expensive options are beyond reach, but all hope is not lost for Beijing. In a BBC World Service report Dr. Jim Zhang of Duke University expressed optimism that China can make progress after seeing the effects of the air cleanup effort around the 2008 Beijing Olympics.

“Women whose pregnancy was during those eight weeks of improved air quality got babies with a significantly higher birth weight, and we have a large database to show that in general if your birth weight is higher, your later life is healthier.”

Many forms of pollution threaten the health of people in China. Last May, The Guardian newspaper ran a special report of photos of the impact of pollution in China on its citizens.  Many of the photos depicted people who lost a loved one to diseases related to pollution like a mother who lost her youngest son to cancer, potentially related to chromium waste dumping near their village. And last year a study linked air pollution in China to 1.6 million deaths a year.

Li Yan of Green Peace in China sees hope though, even in the red alert in December,

“Actually what’s happening in China right now is quite positive. [The red alert] is a sign of progress in government’s understanding of how they should react and respond to these extreme conditions.”

While there is hope for the future in China major steps need to be taken to improve environmental conditions in the country, since importing air from the UK and Canada hardly seems a sustainable or affordable solution.