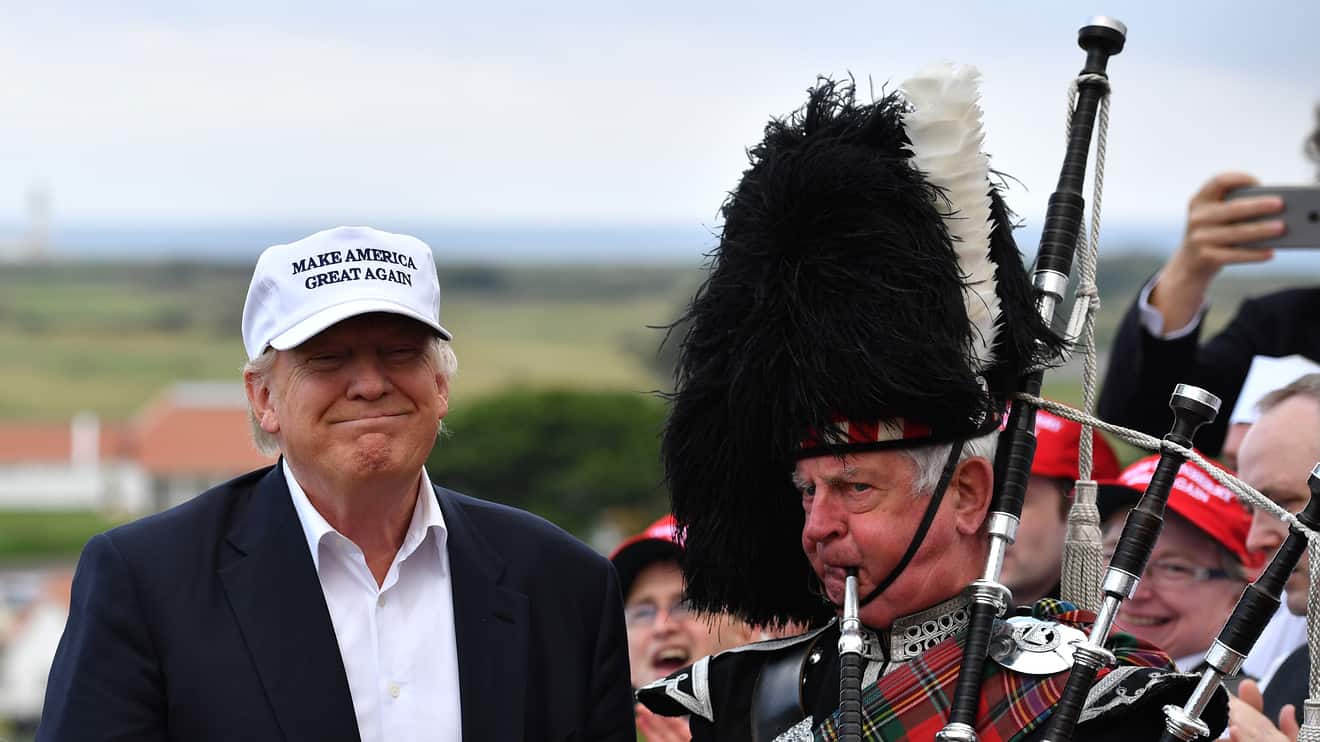 Trump Arrives In The Middle Of Brexit Aftermath

Presumptive Republican nominee, Donald Trump landed in the United Kingdom immediately following the country’s referendum on whether or not to leave the European Union (EU). The UK voted to leave the EU, Trump after arriving for the official opening of his Turnberry golf course promptly congratulated them on the result in his news conference at the golf course and in a tweet. The problem of course is that Turnberry is located in Scotland where the vote was significantly in favour of remaining in the EU. Of course Twitter was quick to react to point out his error.

Trump has been heavily criticized during his campaign about his ignorance on foreign policy and questions have been raised about his ability to even maintain diplomatic relations with allies. Trump had no planned meetings with leaders from Scotland or England during his visit.  During Trump’s press conference a reporter for the UK’s Guardian newspaper, Ewen MacAskill, asked if the fact that he was not meeting with the UK’s PM or Scotland’s First Minister was due to him being seen as ‘toxic’. Trump responded by callng MacAskill a “nasty, nasty guy” and insisting that UK PM David Cameron was negotiating to meet him, but that “right now I don’t think David Cameron wants to meet anybody.”  Cameron had backed the remain in the EU side in the so-called “Brexit” referendum and announced his resignation following the results.

“Donald Trump actively rooted for this outcome, and he’s rooting for the economic turmoil in its wake,” said Jake Sullivan, the campaign’s senior policy adviser. “Every time there’s a significant global event, Donald Trump proves again that he’s temperamentally unfit for the job.”

The shock referendum result caused the UK’s currency to plummet, but when asked about it Trump focused on the silver lining, particularly for his pockets,

The Clinton campaign shared a video mocking Trump’s self-interested analysis of the outcome.

Hours after the #BrexitVote, Donald Trump was in the U.K.

Talking about how he, personally, would benefit.

As The UK Suffers Brexit Morning After Regrets, Clinton Camp Warns Americans Not To Make The Same Mistake

In the aftermath of the UK’s vote to leave the EU analyses abound, attempting to explain how, and why one of the most significant moments in modern European history happened. Looking at the breakdown of voters across the UK a few very clear and significant patterns emerge.

A divided country: how and why Britain voted for #Brexithttps.

Residents with higher education and higher income mostly voted to stay while those at the other end of the spectrum voted to leave the EU. In areas where the UK Independence Party (Ukip) a right-wing populist party had a stronger result in the last general election the vote went in favour of leaving the EU. Ukip underpinned its pro-leave campaign with strong anti-immigrant sentiment including a controversial anti-immigrant poster that was accused of inciting racial hatred. The results closely parallel the demographics of Trump supporters, Trump himself has expressed his fondness for the “poorly educated”. The concerns and opinions of many of UK voters including nostalgia and concerns about immigration, would not at all be out of place in the populist groundswell that Trump has ridden to the nomination.

In Barnsley, 70% of the population voted to leave the European Union @C4Ciaran found out whyhttps.

Clinton did not address Trump specifically in her statement in response to the EU outcome, but did take an indirect swipe at Trump with a call for stability and unity,

This time of uncertainty only underscores the need for calm, steady, experienced leadership in the White House to protect Americans’ pocketbooks and livelihoods, to support our friends and allies, to stand up to our adversaries, and to defend our interests. It also underscores the need for us to pull together to solve our challenges as a country, not tear each other down.

Given some of the morning after reaction in the UK, there seems that some leave voters are regretting having gone down this path. Not surprising given the impact on British and European markets and currency as well as the resignation of the Prime Minister. The leave campaign has already started to backpedal on important promises about immigration and the redistribution of funding. The result has also ignited calls for a second referendum in Scotland, though the country decided to remain in the UK earlier this year. Scotland’s First Minister, Nicola Sturgeon, has promised a new referendum as Scotland overwhelmingly favoured remaining in the EU. In Northern Ireland,  Sinn Féin, the Irish republican party,  has are now pushing for their own vote on uniting with the Republic of Ireland, which is in the EU. Northern Ireland in also voted to remain, though by a smaller margin than Scotland. All this upheaval has caused worry and some regret, especially given that it seems that many voters didn’t seem to know what they were voting about if the steep climb ‘What is ‘Brexit’?’ immediately following the vote is any indication.

Been hearing people like this all day, and they’re making me just more angry.

Adam from Manchester voted for LEAVE. He is “shocked & worried” by country’s decision to Brexit. Don’t be like Adam.

Some Trump supporters may be using him as a protest vote against the state of the nation as some Brexit voters may have, but perhaps they should reflect on the fallout in the UK and consider the consequences of a protest vote for an extreme option.