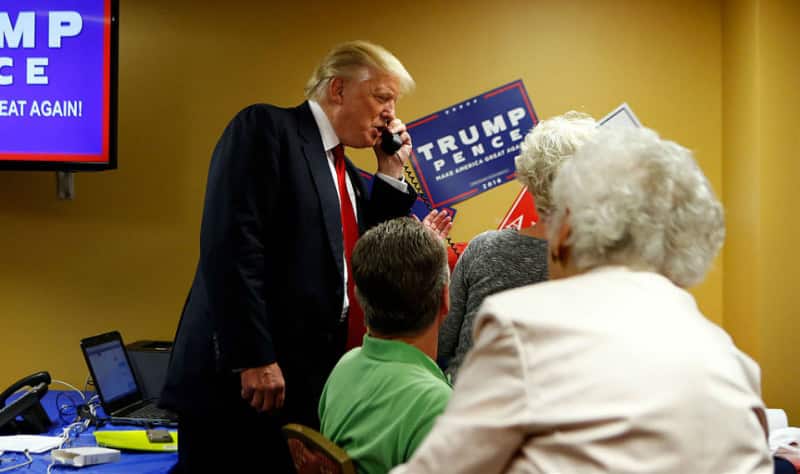 President-elect Donald Trump spoke with Taiwan’s President Tsai Ing-wen on the phone Friday. After getting blasted up and down and left and right in the press and Washington’s foreign policy establishment, Trump tweeted “The President of Taiwan CALLED ME today…” but the Taipei Times reported that the call “was arranged by Taiwan-friendly members of [Trump’s] campaign staff.” China lodged a formal complaint with the US government about the call, The Guardian reported Saturday.

The American public who aren’t getting their news primarily from Trump’s tweets, Breitbart and Fox, may understand generally that this was a bad move. But I suspect many may not fully understand why it was so bad, since it’s a fairly esoteric issue. Here, then, is an explainer about why it was so bad for diplomacy that Trump spoke with Tsai on the phone.

Taiwan’s status is rooted in China’s tumultuous history in the 20th Century. China fought a huge civil war from 1927 to 1950. The communists, under Mao Zedong, and the Kuomintang nationalists, under Chiang Kai-shek, fought for control of the country after the collapse of the ancient Qing dynasty, Western mercantilism and the Japanese navy humiliated China. The civil war paused from 1937 to 1946 as the two sides agreed to put their differences aside to fight the Japanese invasion. But Chiang held back and let Mao do most of the fighting, thinking that the two sides would bleed each other dry and the nationalists would reap the benefits. Instead, the communists emerged from their war with Japan some of the most battle-hardened guerrillas on the planet, with greater fury at Chiang’s perceived treachery. They also captured more territory and seized Japan’s heavy weapons. After Japan was defeated, fighting between the two sides resumed. By 1949, the communists had driven the nationalists from most of mainland China. Kuomintang retreated to Taiwan.

Mao prepared to invade Taiwan, but, at the urging of Joseph Stalin, Kim Il Sung invaded South Korea. The US rushed to defend South Korea, and pushed deep into North Korea in its counterattack. By late 1950, Mao was faced with the decision of whether to stop an American army closing in on his eastern border or fully crush Kuomintang and take Taiwan. He chose the former, and drove the US back to the DMZ, saving North Korea as a buffer state. In response, the US deployed the Seventh Fleet to guard the Strait of Taiwan, allowing Kuomintang to set up a government on the island. This established the borders of East Asia that still exist today.

Here’s the kicker. Because the split results from a civil war that didn’t end with a full capitulation, both the People’s Republic of China government in Beijing and the Republic of China government in Taipei claim to hold the legitimate sovereignty over all of China. Beijing considers Taiwan a rebellious breakaway province. Taiwan sees itself as the rightful Chinese government in exile. The problem is not that the two states claim a co-equal right to exist that could be recognized. They claim a mutually exclusive right to rule over each other.

The US did recognize Taiwan, and treated Beijing as an illegitimate government, until the late 1970s. In Nixon and Kissinger’s vaunted opening to China, they rescinded formal recognition of Taiwan, and recognized China’s “One China Policy.” A policy feud broke out early in the Ronald Reagan administration over whether to recognize Taiwan, but ultimately Reagan stuck to the policy. It is believed that no US president has called the president of Taiwan since 1979, as presidents of both parties have relied on the stability this policy. Nixon drove a wedge between Russia and China that mostly still exists today. But it will likely only continue to exist as long as the US acknowledges certain realities about the scope of China’s power.

Consider the relative size of China and Taiwan in several dimensions. Mainland China is about the size of the United States. Taiwan is about twice the size of Hawaii. China’s population is 1.35 billion. Taiwan’s population is 23.5 million. China’s GDP is over $9 trillion. Taiwan’s GDP is under $500 billion. China spends $145 billion on its military. Taiwan spends $10 billion on its military. By any measure, China is many orders of magnitude bigger and more powerful than Taiwan. It might feel good, and seem consistent with our values, to recognize a democratic republic like Taiwan, and tell a one-party communist state like China to screw itself. But to do so would be flying an airplane of ideology into a mountainside of reality.

For this reason, China is on the permanent UN Security Council, while the UN doesn’t recognize Taiwan. Only 22 countries recognize Taiwan. They include countries like Kiribati, Palau, and São Tomé and Príncipe, tiny countries that have acute national security reasons for wanting to normalize the recognition of a country in the shadow of a much larger country.

Trump Needs A Serious Secretary Of State As Soon As Possible

Unlike Russia which has become increasingly belligerent about conflicting claims in former Soviet space in recent years, China makes it very easy for the world to do business with both China and Taiwan without infuriating Beijing. Countries can pursue trade, cultural exchanges, defense cooperation, with Taiwan, and China generally turns a blind eye. Just don’t acknowledge Taiwan’s sovereignty, because Taiwan claims sovereignty over China, and China is good. That is a very low bar that China sets. It costs virtually nothing beyond semantics, establishment of embassies, and formal state-to-state contact, to not step over China’s red line. That very low bar has engendered relative peace in the Asia-Pacific region since the end of the Korean War. One of Trump’s first acts as president-elect was to step over that line.

China may be playing a very long waiting game, waiting for the day when American hegemony in the Pacific collapses and it can reabsorb Taiwan by hook or by crook, even if it’s not in our lifetimes. But beyond diplomatic formality, it’s not aggressively seeking to undermine Taiwan, or fight anyone over Taiwan’s status. Trump’s phone call raises the specter that China will no longer be passive about this issue, and may rethink its policy of trade cooperation with the US and addressing strategic differences in the Pacific region through diplomatic channels. It raises the specter that Trump may haphazardly push China and Russia closer together into a powerful bloc determined to confront and undermine America’s post-World War II security architecture in Asia, Europe and the Middle East. That would potentially threaten millions of lives, and presage a dramatic reduction in liberal democracy worldwide.

A spokesman for China’s Foreign Ministry said in a statement about its formal complaint, that China viewed the call as a “petty” move by Tsai, implying that they considered Trump as oblivious to the long-standing structure of US-China-Taiwan diplomacy, and considered Tsai as a far more cunning politician who conned Trump into making a move for her. This is insulting to Trump and vaguely threatening to Tsai. But China also notably left an exit door open for Trump. If Trump signals that he didn’t understand, but people who do understand the region’s diplomacy will be appointed post-haste, then China is likely to forget the incident. If Trump doubles down, China’s gloves will likely come off quick in its trade, diplomacy and military posture.

Trump’s unprecedented blustery populist style was enough to win the Electoral College in the presidential election. But America’s domestic politics are remarkably black and white. Presidential campaigns play a zero-sum game on a media and electoral Checkers board. This does not, in and of itself, prepare a president-elect for the world of diplomacy, which is a game of Chess played on the squares of a Rubik’s cube. This is why tact, caution, delicacy, and subtle symbolism are so important to the art of diplomacy. A single false move can set off a series of unintended consequences.

The Washington establishment needs to go all out in pressuring Trump to appoint a responsible power broker to the position of Secretary of State as soon as possible. And it needs to be understood that he or she will be running Trump’s foreign policy. If this doesn’t happen, Trump will soon break something important that won’t be easy to fix.