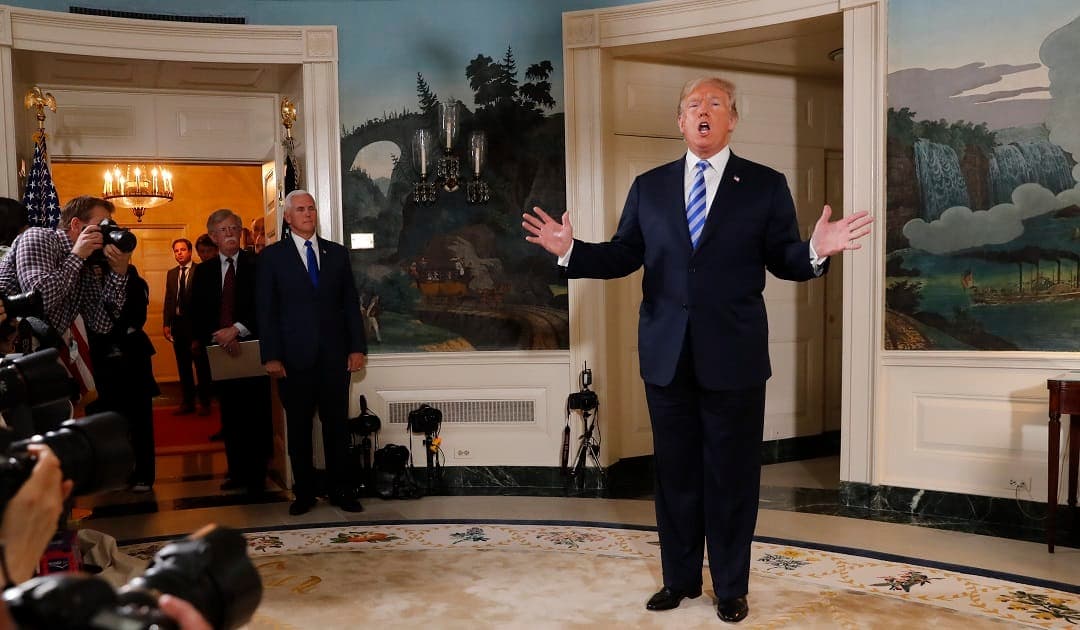 Cue the trumpets! The US and Iran struck a nuclear deal Tuesday, along with world powers England, France, Germany, the EU and (cue the ominous violin) Russia and China.

Since January, conservatives in America, Israel and the Sunni Persian Gulf states have been lambasting this deal before it was even clear what it is. Now that the deal is public, their objections seem detached from reality. One of the sticking points for American conservatives has been that Russia and China are parties to the deal, and would cause “inevitable obstruction” in the UN Security Council if Iran reneged. This, they have argued, would mean that the sanctions would not go back into place if Iran cheats, and the deal would be toothless, making it dead on arrival. This contains two assumptions: that Russia and China would torpedo an effort to punish Iran if it cheated, and that resuming sanctions would be a muddled, wishy-washy process. Both of these assumptions now look foolish.

The so-called “snap back” mechanism, whereby sanctions would be resumed if Iran violates the deal, is flawless. There are two key aspects of ‘snap back’ that make it foolproof. If Iran was suspected by any of the powers signatory to the agreement to be in violation of the agreement, Iran would be referred to a Joint Commission for arbitration. At this point, the Commission would have 30 days to resolve the issue. If it is not resolved, or the Commission does not unanimously agree to extend the 30 day deadline, the UN Security Council will automatically reapply all of the sanctions.

So, let’s say French nuclear inspectors are watching the constant live videos of Iran’s nuclear sites that the deal calls for, and they see something weird. They arrive unannounced, and they are denied access. They call Paris. France accuses Iran of cheating. A 30 day countdown begins clanging in Tehran, with the looming threat of the same economy-crushing sanctions that leveraged Iran into negotiating in the first place. Until France, and every other party, are satisfied that nothing fishy is happening, Iran is alone. Calling Moscow, calling Beijing, will accomplish nothing. Iran must prove to the world it is not cheating, or suffer utter diplomatic isolation.

This is extraordinary. It essentially means that if any party to the agreement suspects Iran of cheating, then Iran is presumed guilty until proven innocent, and faces automatic punishment unless it proves its innocence under a tight deadline. The deal effectively codifies coordinated, global, unrelenting pressure on Iran. There is little in the annals of diplomatic history that this degree of pressure can be compared to. Recall the Bush Administration’s futile carrots and sticks that once seemed to reward North Korea for bad behavior as it developed its nuclear program. Bush built a house of straw for North Korea. But no big bad wolf will ever blow down the titanium cage President Obama and world powers have built for Iran. The deal makes it so the possibility of wiggling out of responsibilities doesn’t exist.

How did the negotiators accomplish China’s and Russia’s agreement to give up their vetoes? That is an intriguing question, and one that journalists and historians are likely to try to dig for. At the moment, the few people who know have not given any hint. Back in May, US Ambassador to the United Nations told Charlie Rose that getting Russia and China to agree to this was crucial to a workable deal. When asked how that would be accomplished, “She offered no details.”

There are two general possibilities. China and Russia either got something for their veto, or they gave it up easily. That may sound simplistic, but it would depend on how Beijing and Moscow perceive the situation and their interests. China and Russia are not shy about using their vetoes in the UN Security Council, to rebuff Western power plays, even to protect Iran’s interests. Indeed, their vetoes are some of their most important diplomatic leverage, and one of the easiest ways for them to level the playing field with Western powers. Intelligence analysts have suggested that Russia was in a powerful position, because its decision whether or not to give up its veto could “make or break the Iran deal.” This analysis assumes that Moscow’s veto privilege is important enough to risk the deal collapsing because they wouldn’t give it up. It posits that China or Russia would threaten an otherwise viable deal in order to get something in return for their veto. It is very possible that there was major quid pro quo involved. If so, we may never know what it was. But, keeping an eye on developments in Ukraine and the South China Sea for any surprises could potentially be informative.

However, it is also possible that Beijing and Moscow prize the perception of being responsible world powers, invested in one of the most important diplomatic achievements in a generation, above the privilege of their veto. It is also possible that they consider nuclear nonproliferation in Central Asia to be a greater priority than their one-shot leverage. Iran is quite isolated on the issue of developing nuclear warheads. Russia can’t be excited about the possibility that an Iranian bomb would set off a nuclear arms race with micro states in the Caucuses, while China would sweat an arms race with Kazakhstan, Kyrgyzstan, Uzbekistan, etc. Pakistan has also flirted with Saudi Arabia’s Sunni coalition. If Islamabad began racing with Tehran, that would trigger a military buildup in India, which China would consider a worst-case scenario for its regional security. So, it is possible that China and Russia gave up their vetoes for relatively little, because they wanted the deal to work.

However it was accomplished, the inner dynamics of the agreement make it foolproof, and enshrine lasting pressure on Iran not to build a nuclear bomb. This is a fascinating diplomatic achievement. This is the real deal.