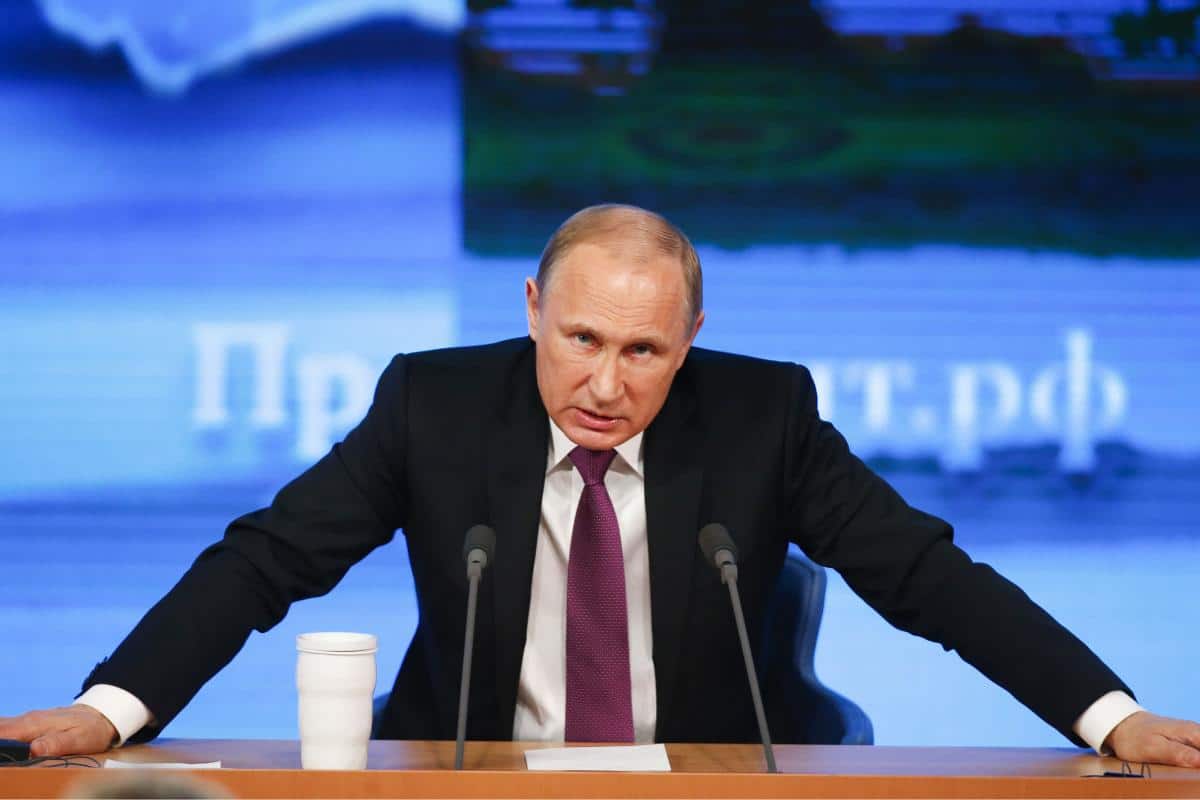 The first eyebrow-raising moment was a week before Christmas in 2015 when Vladimir Putin endorsed Donald Trump for president, and Trump called it a “great honor.”  The connection between Putin and an American presidential candidate seemed very odd but merely rhetorical then. Now, though, evidence is piling up of a multi-layered espionage attack by Russian intelligence to support Donald Trump and undermine Democratic nominee Hillary Clinton.

Tension has been growing between Russia and the US, the EU, and NATO ever since Russia invaded Crimea following a democratic uprising in Ukraine that toppled Russian-backed president Viktor Yanukovych in 2014. Russia and the West have faced off in Syria. And though they have reached agreements to stay out of each other’s way, Russian warplanes recently bombed a secret base that was being used by American and British special forces near the Jordanian border, the Wall Street Journal reported. Russia has engaged in provocative aerial maneuvers extremely close to an American warship in international water, as well as other provocative actions in and around US and NATO airspace.

Russia has sought to influence European elections in recent years. Putin has especially gotten cozy with right wing nationalist candidates who want to break up the EU. Russia has supported France’s Marine Le Pen and her National Front party, and may have wired them millions of euroes. Putin supported the fascist Golden Dawn party in Greece. Italy’s billionaire and former Prime Minister Silvio Berlusconi, widely considered an inept buffoon, was supported by Russia, and during his tenure, Berlusconi was often the only major Western leader backing Putin in diplomatic rows. Berlusconi was suspected to be “profiting personally and handsomely” from secret energy deals with the Russian president. During the Brexit referendum in Britain, Russia was “carefully funneling money into propaganda to nudge people,” into voting to Leave the EU. Across Europe, in an increasingly brazen way, Putin has been working to sow division and chaos, fund and reward far right, demagogic and incompetent politicians and causes, and drive wedges through the EU and NATO.

If this all sounds chillingly familiar as you look at the highly unorthodox American political phenomenon of the Trump campaign, you’ll be joining the experts in thinking that. Trump is heavily indebted to Russian entities, is displaying a far right leadership style at once belligerent and buffoonishly incompetent just like Berlusconi, is espousing a policy platform that would dramatically weaken the West and empower Russia, and is benefiting from targeted operations by Russian intelligence. And the worst may be yet to come.

1. All the other discussions of Trump’s finances aside, his debt load has grown dramatically over the last year, from $350 million to $630 million. This is in just one year while his liquid assets have also decreased. Trump has been blackballed by all major US banks.

2. Post-bankruptcy Trump has been highly reliant on money from Russia, most of which has over the years become increasingly concentrated among oligarchs and sub-garchs close to Vladimir Putin. Here’s a good overview from The Washington Post, with one morsel for illustration …

“Since the 1980s, Trump and his family members have made numerous trips to Moscow in search of business opportunities, and they have relied on Russian investors to buy their properties around the world.““Russians make up a pretty disproportionate cross-section of a lot of our assets,” Trump’s son, Donald Jr., told a real estate conference in 2008, according to an account posted on the website of eTurboNews, a trade publication. “We see a lot of money pouring in from Russia.””

3. One example of this is the Trump Soho development in Manhattan, one of Trump’s largest recent endeavors. The project was the hit with a series of lawsuits in response to some typically Trumpian efforts to defraud investors by making fraudulent claims about the financial health of the project. Emerging out of that litigation however was news about secret financing for the project from Russia and Kazakhstan. Most attention about the project has focused on the presence of a twice imprisoned Russian immigrant with extensive ties to the Russian criminal underworld. But that’s not the most salient part of the story. As the Times put it,

“”Mr. Lauria brokered a $50 million investment in Trump SoHo and three other Bayrock projects by an Icelandic firm preferred by wealthy Russians “in favor with” President Vladimir V. Putin, according to a lawsuit against Bayrock by one of its former executives. The Icelandic company, FL Group, was identified in a Bayrock investor presentation as a “strategic partner,” along with Alexander Mashkevich, a billionaire once charged in a corruption case involving fees paid by a Belgian company seeking business in Kazakhstan; that case was settled with no admission of guilt.”“Another suit alleged the project “occasionally received unexplained infusions of cash from accounts in Kazakhstan and Russia.””

In light of this information, a recent New York Times interview seems downright sinister. Trump told the NYT editorial board that his approach to NATO allies is,

“If we cannot be properly reimbursed for the tremendous cost of our military protecting other countries … I would be absolutely prepared to tell those countries, ‘Congratulations, you will be defending yourself.’”

This comment alone is a radical, destabilizing departure from US foreign policy since the end of World War II. The prospect that Trump might make good on this comment is highly alarming. Experts responded swiftly and unequivocally, that collective security only works if common defense is guaranteed.

I have no idea how to convey the enormity of Trump’s NATO comments to readers. They literally make World War III more likely.

Marshall explained that Trump’s convention platform was strangely very accommodating to Putin’s goals in Ukraine, at the expense of virtually everything else,

“The Trump Camp was totally indifferent to the platform. So party activists were able to write one of the most conservative platforms in history. Not with Trump’s backing but because he simply didn’t care. With one big exception: Trump’s team mobilized the nominee’s traditional mix of cajoling and strong-arming on one point: changing the party platform on assistance to Ukraine against Russian military operations in eastern Ukraine.”

Some suspect Trump campaign chair Paul Manafort, a former adviser to Putin’s Ukrainian client president, Viktor Yanukovych, of playing a large role in forcing this policy change on the platform. No sooner had Trump set into the Republican party’s platform his unprecedented vow to undermine Western collective security and renege on decades-old promises to defend small European countries in Russia’s shadow, than Russian intelligence attacked his opponent.

Russian state hackers reportedly operating from the same IP address as that used in a cyber attack against the German parliament in 2015, stole caches of data from the Democratic National Committee. And the likely Russian intelligence sources have “weaponized” Wikileaks, which is run by Julian Assange, who has hosted a show on the Russian propaganda network Russia Today. Wikileaks is now releasing the information to generate clickable headlines, divorced from nuance, designed to exacerbate a wedge in the American left, just as the curtain opens on the DNC in Philadelphia. The hacks notably only targeted the DNC, not the RNC, Trump, the Sanders campaign or any other American political entity. They notably were released with precision timing to maximize their disruptive potential in America’s democratic process. This is not an exercise in transparency. This is an effort to undermine American democracy in order to force a profoundly unqualified candidate onto the American people and government who could possibly have some secret agreement regarding hundreds of millions in personal debt and international security in Eastern Europe.

This might all sound like the plot of a James Bond movie, but these are facts, this is reality, experts are becoming increasingly alarmed and the FBI has opened an investigation. The Hill quoted a White House cyber security expert who said that cyber forensic experts are now working on the assumption that Russia is trying to influence the outcome of the election. He also warned that the worst may be yet to come,

“Voting security is already shaky in many states, Healey said. Russian operatives might have the ability to hack voting machines to influence the outcome of the election.”

Given all this information, it is now more important than ever that Donald Trump releases his tax returns. It is no longer a matter of showing the public that his business is aboveboard. Trump needs to prove that he is not effectively committing treason by colluding with Russia to undermine American democracy and US foreign policy in exchange for massive debt relief. If he will not release his tax returns, the Republican party has a historic responsibility to the United States to sabotage Donald Trump.