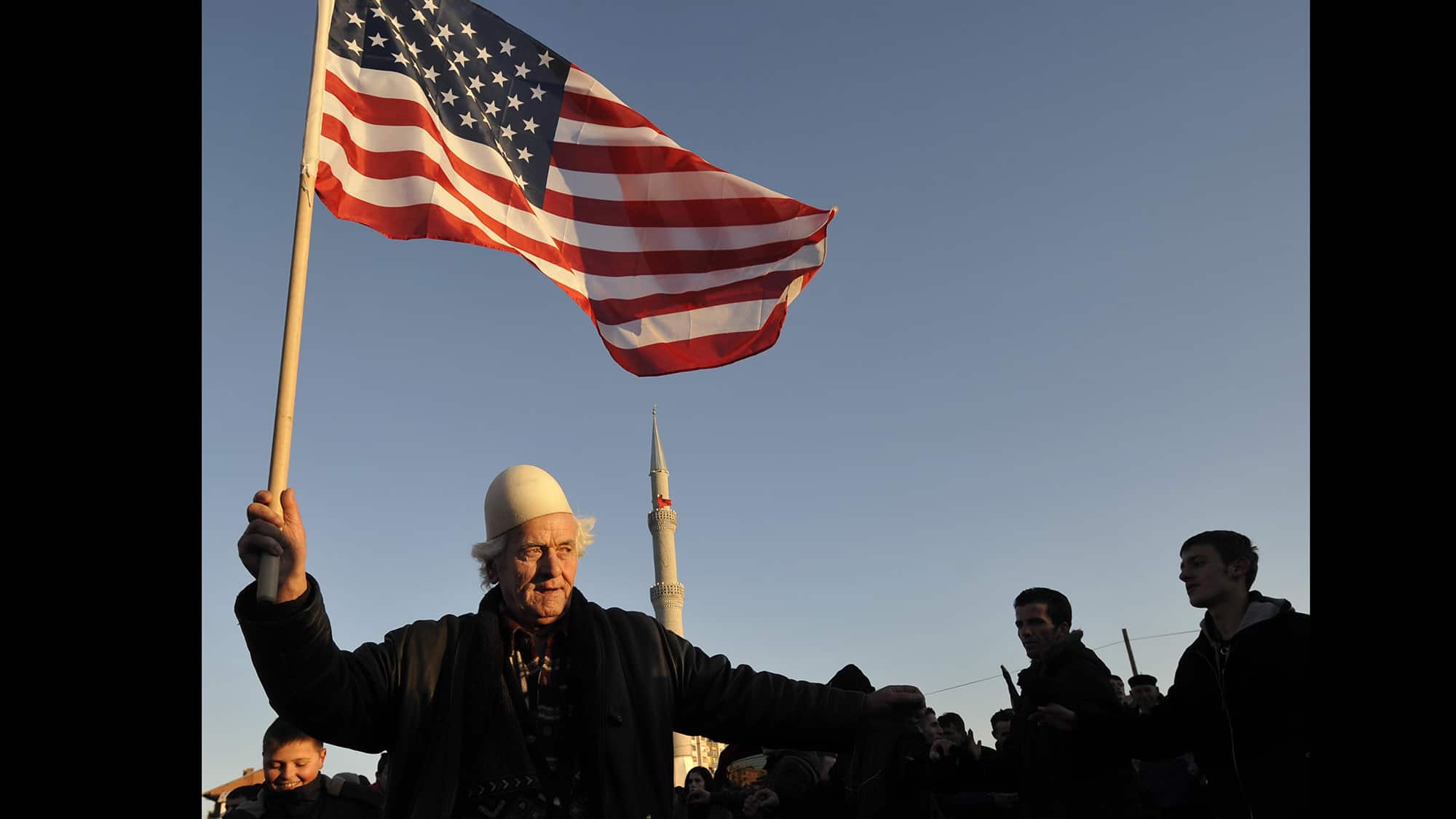 In the midst of a Republican campaign that is spreading fear of Muslims, there is still one predominantly Islamic country that loves America. While across the world the headlines read of Islamist terrorist attacks against Christians in Pakistan, and the GOP front-runner argues for the torture and banning of Muslims, there is at least one country where suspicion of ‘others’ and demagoguery don’t get in the way of a positive relationship. For most Americans, it is probably a little-known US ally as a NATO member, and it’s not in the Middle East. It is Albania. A small Muslim country in the Western Balkans, a region that not so long ago was synonymous with political instability and ethnic war. Today, it can be seen, according to a CNN report, as a model of religious tolerance. In addition, it is one of the most pro-American countries and the reasons Albanians like America run deep. As Frida Ghitis, author of the report explains,

“Walk around the airy streets of the capital Tirana and ask people what they think about the United States, and you will be met with almost uniform responses of admiration, respect and gratitude.”

In regards to the U.S. presidential election CNN states it is easy to grasp the reaction of hesitation whenever Albanians hear the name of Donald Trump. While most of them have not even heard of Ted Cruz, Ghitis says there are high hopes for Clinton. Aurora Xhixha, a microbiologist in this Muslim country said about Trump that “he seems a little crazy, but clever”, while Endri Hasanaj described him as selfish. Though when referring to Trump’s call to ban Muslims from entering the US, Doctor Adelina Bego told CNN,

“Here in Albania we live together, without considering religious differences. We have seen America as the symbol of democracy, a symbol to emulate…  Trump’s proposal would destroy that symbol.”

U.S. secretaries of state have always received VIP treatment in the Muslim country, regardless of whether these are Republicans or Democrats, Albanians have always admired Americans because of their integrity, says Ghitis.

“American foreign policy, which so often suffers from the conflict between ideals and practical considerations, has found here a merger of idealism and action.”

The love Albanians have for the United States started in 1919, at the Paris Peace Conference during which former US president Woodrow Wilson stood up for Albania against a European proposal of dismembering the country. In fact, today a statue of Woodrow Wilson can still be seen in Tirana’s Wilson Square. Even after Albania faced a repressive communist dictatorship under Enver Hoxha, who used strong anti-American propaganda, Albanians kept seeing the US a the land of freedom and as the country that helped Albania gain their independence and sovereignty.

In 1991, former Secretary of State James Baker was received by over 300,000 Albanians chanting “USA! USA!” The US success in the removal of a spreading communist wave, which in addition gave Albania access to NATO in 2009, have kept the Muslim country thankful. And the love for America grew stronger when the US led a NATO operation in Kosovo against the Serbian violence inflicted upon Kosovar Albanians. And in 2007, when George W. Bush visited the country, the then mayor of Tirana Edi Rama (now Prime Minister of Albania) declared that Albania was the most pro-American country in the world.

Albania is considered a moderate country, though, unfortunately it is not exempt from terrorism. According to CNN,

“a number of Albanians have joined ISIS. But extremism is undoubtedly rarer here than in the Middle East or even Western Europe.”

And although the US constantly reminds Albania about the need to eliminate corruption in the government, to fight human trafficking and terrorism, to deal with refugees and flows of migrants, the consistency in US foreign policy towards Albania has helped the US keep its admiration from the Balkan country. It is difficult to imagine something like this coming from a Muslim-majority country from which has been in the cross-hairs of American policy, rather than defended by it. Yet, the US policy towards Albania, and the affection from Albanians to the US reminds us, that understanding the nuances of foreign policy is crucial for a presidential candidate.

‘Get ‘Em Out Of Here!’: Trump Camp Sued For Violence, Racism On Campaign Trail